City groundsman on Etihad pitch: If all goes well on Wednesday, the only thing Manchester City’s head groundsman will have to keep his eye on during the Arsenal game will be the ball.

When competitive games were suspended in March and the scale of the impact of the pandemic became clearer, the Blues were one of a number of Premier League clubs to bring forward planned summer work to their pitch. 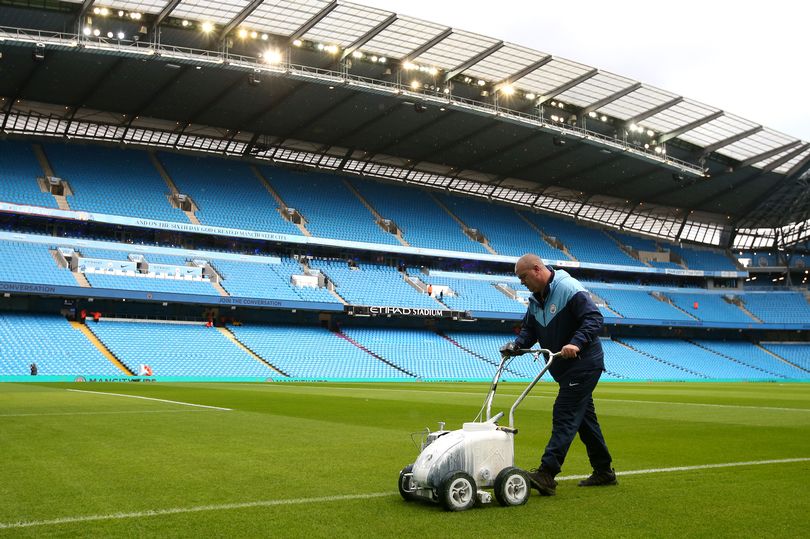 Lee Jackson, the head groundsman who has been working at the club since Peter Reid was manager, oversaw the work on the pitch at the Etihad that should see it new and improved for when Mikel Arteta brings his Gunners side up for Wednesday’s clash.

The work was not without complications due to the weather, but when the players next step out of the tunnel they should not notice a difference under their feet even if the stands around them are empty.

“We reseeded and it was quite a hairy few weeks initially because of the cold temperatures,” Jackson told M.E.N Sport.

“We had a few frosts going into April and it was scary at times if I’m honest but these last four or five weeks it has really come through with the weather picking up and we’re in a really good place at the moment to be fair so we’re very happy with it.

“I think we’re in a good place. It may be that at the end of the season we do a little bit more work on it, not to the extent that we did at the end of March but at the moment in the short term this pitch will be ready for the remaining Premier League games and any Champions League games.”

The testing done on the pitch has been promising and the players have already had a chance to get accustomed to playing in their new surroundings, while the timing of City’s games should counter any potential problems caused by warm weather; five of City’s six scheduled home matches so far are in the evening, which should help keep the pitch watered.

One thing Jackson and his team will have to adjust to though is the lack of ball boys in the stadium.

The restriction on numbers for matches behind closed doors means that in addition to their work on the pitch around a game, the ground staff will be responsible for keeping balls circulated and disinfected during the 90 minutes.

“Whether there is a crowd in the stadium or not is irrelevant to us because we’ll just prepare it the exact same,” he said.

“The only difference, certainly with the new Premier League rules for this season, is because there is no crowd there we now have to become ball boys during the game, which has been quite an interesting topic among groundsmen to discuss!

“In the seriousness of the issue, there is quite strict guidance. Because during the game we are literally on the sidelines, we have to disinfect the balls, place them back on the cones around the pitch. As funny as it sounds when talking about it, it is actually quite a serious thing to do so it is going to be interesting doing that.

“We’ve all got our wipes, our face masks, our gloves ready and it is a different culture we have to adjust to because even before kick-off and at half-time we have to disinfect the goalposts and the corner flags so on that side, the pitch aspect remains the same but there are just a few bits thrown in there as part of the new regulations as part of the Covid situation.

“If that gets football back on again in a safe environment, then fine.”