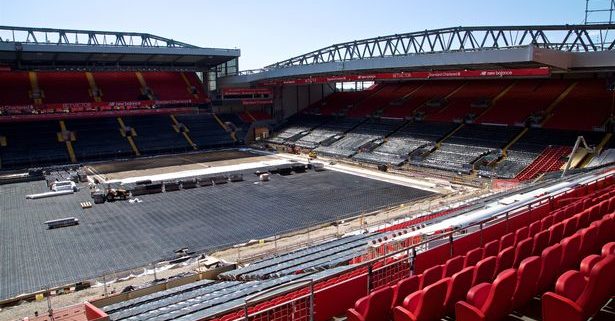 Liverpool are preparing for the new season by relaying the Anfield pitch.

The Reds will play on a brand new surface as set themselves up for a long campaign as they fight in the Premier League and Champions League.

It is the first time in three years the pitch has been relayed – after building works on the Main Stadium prevented a fresh batch of turf in the last two summers.

The new turf is a “Desso GrassMaster” which is a combination of natural grass and 20 million artificial grass fibres.

The natural grass roots mix with the artificial turf fibres and the result is a pitch that can take three times as much football as a normal, natural grass pitch – which is needed for the hectic schedule.

Wembley, the Etihad and the Emirates also use the blend.

The upgrade will mark a year’s anniversary of the upgraded Main Stand – which was opened last September to boost the capacity of th Merseyside stadium to 54,074.

Boss Jurgen Klopp blamed a “dry pitch” at the end of last season as they searched for a Champions League place.

“I know people don’t want to hear this but the pitch was really dry,” the German said after a draw with Southampton. “We gave it all the water we had but, because of the wind, it was really dry.

“It was nobody’s fault, but it made it difficult to play.”

Liverpool will use the pitch for the first time against Crystal Palace.