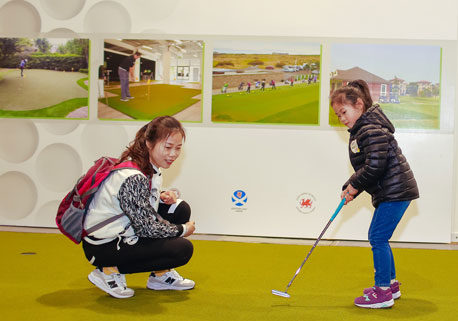 Global leader in artificial surfaces for golf, Huxley Golf, exhibited at the China Golf Show (CGS) in Shanghai for the first time this spring. The three day event is one of the biggest in Asia, welcoming over 15,000 visitors and over 500 exhibitors showcasing premier golf technologies from around the World.

Paul Huxley, Director of the Hampshire-based company said: “The political landscape in China means that, surprisingly, golf remains a fledgling sport there. However, after bringing home the nation’s first golf Olympic medal from Rio last year, Chinese interest in the sport continues to grow, particularly amongst young people. We established Huxley Golf China in 2014 and are proud to be a great British business making headway in China, when, as we know, many goods travel in the other direction.”

Huxley Golf China is based in Shanghai, host to a number of major golf events and home to one of China’s largest golfing populations – accounting for nearly 300,000 players in Shanghai city proper and neighboring cities in Jiangsu and Zhejiang provinces. The company advises, designs, supplies and installs bespoke all-weather greens, tees, practice nets, pathways and lawns, modular greens and practice mats for both commercial and domestic use.

Song Tan, Chief Executive Officer of Huxley Golf China said: “It was a real pleasure to showcase Huxley Golf at our country’s premier golfing event for the first time. It was particularly heartening to see so much interest amongst young people and I’m sure that we have played a vital part in inspiring the next generation of golfers, signaling the future success of the sport here.”

The Chinese General Sports Administration Ten Year Development Plan for Teenagers lists golf as a key sport because of its ability to help young people with teamwork, concentration, self-control and competitive spirit. Currently, there are around 10,000 young golfers in China.

Huxley Golf provides premier all-weather surfaces for golf around the world. Clients include training and coaching establishments, golf resorts, ranges and academies as well as many well-known golf courses.

SALTEX 2017 leading the way in innovation