The courts have played a prominent role in the club’s history and have been a feature since French Airmen originally founded it in the 1940s. When the club was re-established in 1970, the courts were kept and they are now the only two grass surfaces in the York Tennis League, which is one of the biggest in the United Kingdom. 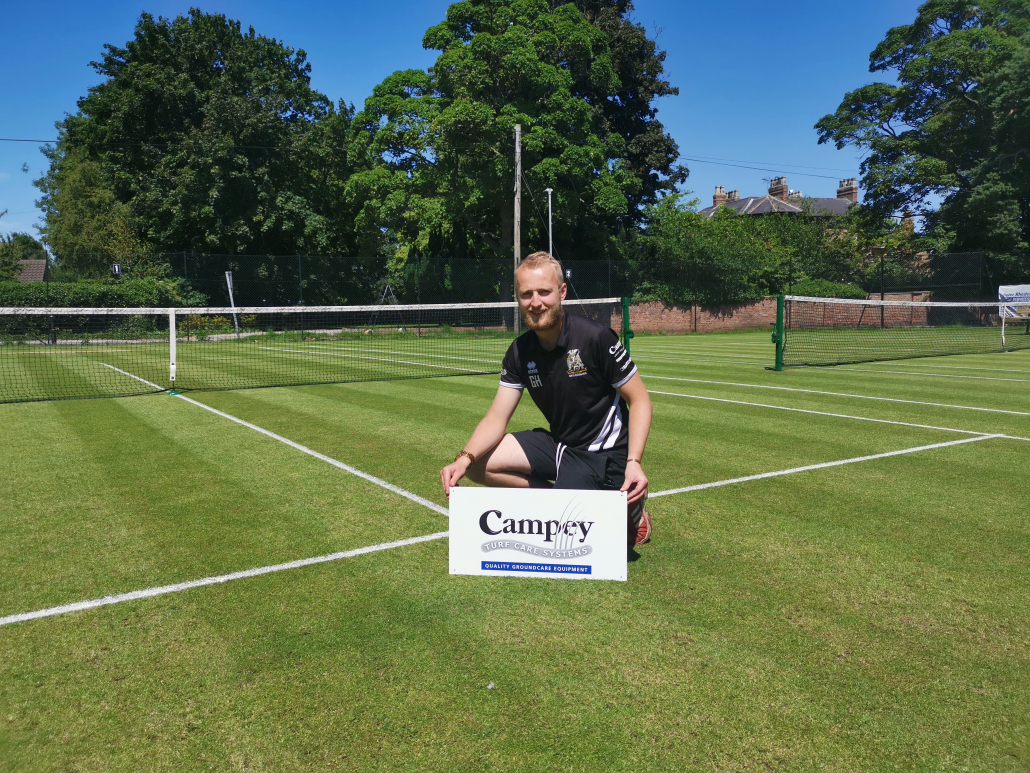 Campey applies a touch of magic

While the condition of the courts has always been at a usable standard club member and volunteer groundsman, George Hobson, saw the potential in them and took it upon himself to raise the quality. George had no experience of turf maintenance when he started two seasons ago, but along with his work as a magician that has seen him perform at numerous events including for the Aston Martin Racing Team at Le Mans, he has made significant progress with the courts.

“I had no previous experience in groundsmanship, but I seem to be obsessing over grass now,” George began. “I’ve been playing on these courts since I started playing tennis, which is 15-years ago and I knew they could be a lot better, and I wanted to see what I could do.

“I first met Ben Taylor from Campey at Wimbledon’s Grass Court Seminar in August last year, and they had the machinery on the courts there which looked amazing. After meeting Ben, I asked him if he knew of anyone who had a KoroÒ in our area because it would be interesting to see what price they’d charge to help us out. Campey very kindly came back and said they would do a renovation demo day on the tennis courts, so that’s how it started.

“The tennis courts at the club have never really had a renovation so the thatch was like a sponge. The quality of the courts wasn’t there because of that, but the KoroÒ did the job we needed to take the thatch away.

“The courts are fantastic now, and they’ve held up well to the use they’ve had, which is now over two hundred hours. We usually have one hundred members at the club and from those that have played on them we’ve had loads of positive responses. As this was our first-ever complete renovation of the courts, it was a steep learning curve for me. I selected a new grass seed that was a 100% ryegrass as our tennis season runs from the end of April to early September. There’s a lot of wear on the courts, so I hoped this would allow them to stay at their prime for longer. The use of the Vredo seeder and Uni-ScratchÔ prepared the seedbed perfectly to allow for very high germination rates. There’s always going to be a few things that I may have missed from our first renovation, one thing being that the baselines over the years have had different types of loam applied, this led to them panning which doesn’t allow good root growth. There’s always something new I’m learning and discovering which is really helping to expand my knowledge further.

“Doing the renovation and the results of it has attracted a few more members in which is good. The grass courts are in a really prominent position in the village so there’s a lot of traffic going past them and seeing them in such good condition has attracted some of those new members.”

For more information on the KOROÒ FIELDTOPMAKERÒ or how your surface can be improved using Campey machinery contact your local Campey Product Specialist or email info@campeyturfcare.com.

Primo Maxx offers opportunity to save
Scroll to top