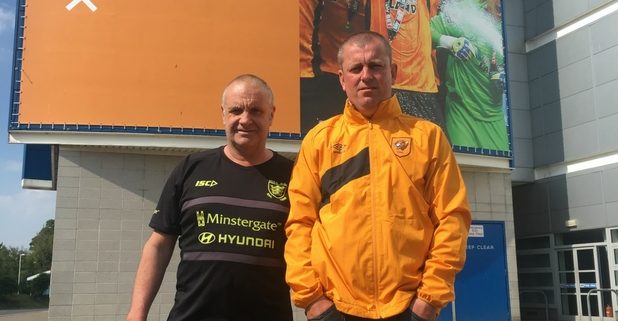 ‘Sacked’ Hull Groundsmen Want Your Help To Get Their Jobs Back – Two KCOM groundsmen who claimed they were sacked over the state of the pitch have set up a crowdfunding page to take their bosses to an employment tribunal. Darrell Cook and Mark Harrison say they were dismissed a month ago by the Stadium Management Company (SMC) for gross misconduct after claims the pitch, used by Hull City and Hull FC, had been deteriorating.

Darell, 55, says he was also told he was being sacked for working as a kit man for Hull FC while Mark claims he was told another reason for his dismissal was down to ordering too much grass treatment product. The third allegation Mark has made relates to allowing casual workers to turn up and repair divots in return for a match ticket. They were also told not to return.

Both men insist they did nothing to warrant their dismissal and were not given any warnings beforehand. They say they are not looking for compensation, they just want their jobs back.

Speaking to Hull Daily Mail, the two men said: “We don’t want the inevitable attention this may bring but we had no other option if we were to fight for the jobs we love and to clear our names.

“This is not just for us but for our wives, parents and children. We’re proud men who have always taken immense pride in our work.

“We wouldn’t normally be able to afford a legal challenge like this against such formidable opposition. There is no access to legal aid and we didn’t earn big salaries so we hope the people at SMC understand why we had no choice but to take this route.

Darrell added: “This is a job I have done for 27 years and there was no indication anything like this was coming.

“Both myself and Mark have worked for the SMC for 16 years. We have never been in any trouble or had any reprimand so this came out of the blue.”

“The idea of crowdfunding has alleviated that worry a little. We are both well-known and I hope well-liked so we would like to think we’ll get some support.”

The two men say they are only seeking justice at the tribunal and have not issued proceedings.

“We want to clear our names. We actually want to get our jobs back and a tribunal can order that. We were proud to be involved with Hull City and Hull FC – we just want to get back to work and continue that association for many years to come.”

Understanding The Role Of Bedknives
Scroll to top