Hagg’s Castle’s Silver Lining: It wasn’t the best day that Scott Ballantyne, Course Manager at Glasgow’s Hagg’s Castle Golf Club, had ever experienced, and the fact that it was just before Christmas merely compounded his misery, but there has been a glorious silver lining to that particular cloud.

“It was the Friday before Christmas 2016 and someone popped in to tell me that there was a burst drain at the back of the 1st green,” recalled Scott.

“We went to investigate and what we found was just like a river spewing out sewage and it was coming from the Shieldhall Tunnel project, the £100 million city sewage project which involved a tunnel being dug under the city,” explained Scott, adding that he has since become something of an expert on the Shieldhall Tunnel.

The tunnel, now completed, runs underneath a significant part of the golf course, including the 7th hole, the 2nd tee, the 17th and 18th tees, the 16th and all the way up the length of the 17th, in total around 600 metres of golf course. Issues occurred when the drill bit struck unexpected rock.

“I’d never been given an indication that there might be a problem but it happened and we had to deal with it. We dealt with the mess that Friday and then shut down over Christmas for two weeks,” recalled Scott. 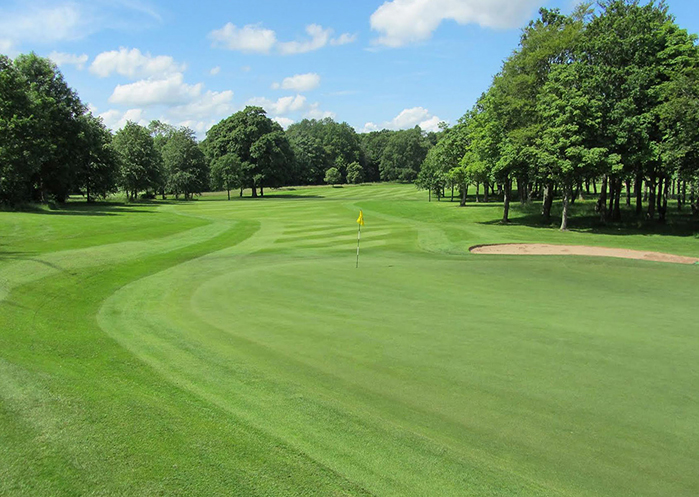 With festivities over everyone returned to work and when the tunnellers turned on their drill it all happened again – an ill-smelling recurring nightmare.

“We cleared it with squeegees for the second time and sacrificed two bunkers which we decided we’d have to rebuild. We told the tunnel constructors that we couldn’t keep clearing up the mess every time it happened so we told them just to go for it and we’d sort it out at the end. We shut down the 16th and 17th holes while they worked and insurance paid for the damage to the course.”

With the course returned to its full glory there was some revenue left over and this was put to good use with a superb new chipping area alongside the club’s brand new maintenance facility.

“It was always the plan to make the existing practice green bigger, but when we looked at it we realised we could put in what we have now – a bunker and full size pitching area surrounded by a fence, much of which we’d already bought to protect the workers who were building the maintenance facility.”

Knowing that the club had the money for the project but still looking for the best result without spending money unnecessarily, Scott turned to Rigby Taylor to examine the options and it turned into a great opportunity to use a new product – Rigby Taylor’s R Duo 50-50 blend of poa reptans and Browntop bents.

Everyone was confident having witnessed successful trials of the mix a Loch Lomond Golf Club during which it was starved, fed and shaved but what it hadn’t faced was the hand which the Beast from the East dealt it.

But what do you know? It came through it beautifully to the extent that David Carson, Scott’s Rigby Taylor man, and RT’s top man in Scotland, thought that the club had changed course.

“I drove past one day and when I looked in I could see a beautiful green sward on the new area. I immediately thought that they’d decided to turf the area and not tell me!” he said.

He was wrong and if the extreme weather had allowed doubts of its success to enter his head they soon disappeared as he saw first hand the cover that the seed had produced and chatted to Scott about how well the R Duo had come through.

Had they gone down the route that David had falsely suspected and turfed the area it would have cost around £6,500 to turf to the standard a club of Hagg’s Castle’s standing expects but by seeding it cost a few hundred pounds – and Scott still has the other bag he thought he might need but didn’t.

“The mix is clever because the germination point of fescue is slightly earlier than the bent so it accelerates the ameliorating process and you get a quick maturation process at a cost which is not breaking the bank. What you are doing is eliminating the battle of having to rid of the cauliflowers and getting it down to acceptable poa,” explained Scott, adding that he’d be more than confident about putting using R Duo on putting greens as well as chipping greens.

David also looks on the work at Hagg’s with a considerable amount of pride.

“Jayne Leyland was confident that it would do well but if you were playing by strict agronomy rules you are not going to get the STRI saying put poa on but this is the modern world and demands change.

“We have played it low key, we didn’t even put the mixture in our catalogue, and just thought we’d see how it went and are delighted with the results we’ve seen here,” said David.

Money was also saved on the new chipping area by merely adding another 25 yards to the three metre high fencing which had been bought to protect the guys building the maintenance facility from errant shots from the adjacent driving range.

All in all the project has been a huge success and turned what was a foul smelling disaster into a
major plus for the golf club.