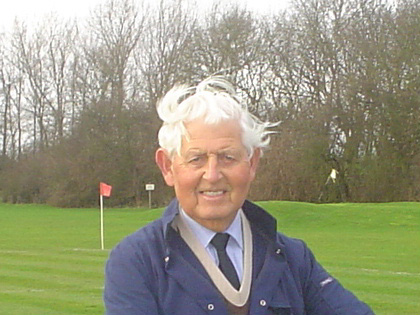 “He has left behind the finest lawns, pitches and greens in the county for the enjoyment of thousands and they will be his lasting legacy.”

Those were the words in tribute to renowned Grimsby groundsman, Don Harris.

Don was instantly recognisable to the many thousands of sportsmen and women who played on his immaculately-prepared wickets, pitches and greens.

His line markings were the most precise and were measured to perfection.

Generations of players from top teams such as Freetime Sports, Humbertherm and Cleethorpes Town, all had the chance to perform on the best pitches thanks to Don.

He had trademark white well-groomed hair and a permanent tan due to his outdoor life. He always wore a shirt and tie and his blue boiler suit.

He later went on to transform a disused field at Courtaulds into pitches for football and cricket.

The Cleethorpes Conservative Club bowling green on Grimsby Road was also viewed as among the best in the borough.

His wife of 63 years, Jean said: “There was never a time when we went into town and someone shouting over a greeting to Don.

“He loved his life. He wasn’t ambitious but loved what he did.”

She added: “he often told me not to ask him to do anything on a Saturday or Sunday because he was not around.”

There was quite a transformation in his career in 1981 after years driving for Nickerson’s seeds at Holton-le-Clay.

Son Kevin said: “He was 52 years old and Mrs Thatcher was Prime Minister, with four and a half million unemployed.

“He wanted to be a groundsman and everyone thought he had gone barking mad. Most people in their 50s are looking ahead to a retirement. But not dad.

“I have never seen a man as dedicated as dad. He made the police pitches at Bradley a magnificent ground. He had a fantastic reputation and had the best grounds in the area.”

They were so good Grimsby Town FC coach Mike Lyons played the junior squad’s fixtures on the ground.

He also made the Conservative Club green on Grimsby Road, Cleethorpes “perfection with grass”

Kevin told how his son Ben was thrilled to go out with his grandfather on to the Bradley pitches at half time of football matches to replace divots.

Kevin said: “The police used to let their dogs run out on the Bradley pitches. Dad was always someone officers could drop in on.”

In 1995, when Courtaulds handed over their old sports ground on Peakes Lane to St Andrew’s Hospice, bosses decided to create a new playing field near the factory at Moody Lane and they gave the mission to Don

From being under four foot of wild grass, it became a popular football and cricket ground.

There were a lot of local footballers who were able to play at the peak of their performance on Don’s pitches.

Kevin said: “He was meticulous about measuring lines. They were always like an arrow. He was so dedicated and every Sunday morning left home at 8am to get Bradley pitches ready for the matches in the Sunday league

The son said: “He loved doing it. It was something special to him – not just a job.

“In a world where people tend only to do something for money he did if for the love of it. He was never flattered by flash things. to the core he was a genuine, nice guy. He was pragmatic and often said “’Do what you can while you can.'”

Kevin added: “I feel honoured to have him as a father.”

He told how his dad began a footballing tradition in his family by playing as goalkeeper in his army team when he was in the REME. Kevin became a keeper and his son Ben also plays in goal.

He is survived by wife Jean, sons Robin and Kevin and grandchildren Belinda, Iain and Ben, Mathew and Katie and nine great grandchildren.

A funeral service will be held at Grimsby Crematorium on Friday at 9.40am with donations being received for St Andrew’s Hospice.