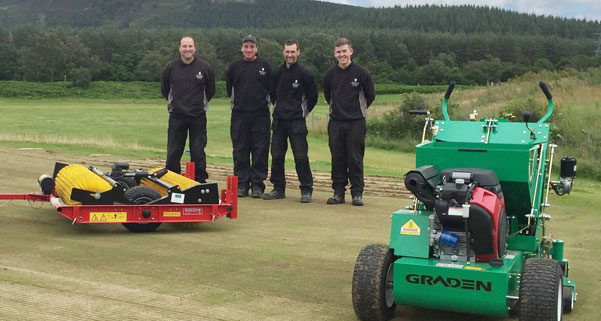 Spey Valley Golf & Country Club may have been voted the most picturesque course in the UK, but for Head Greenkeeper Dave Beardwood it has its drawbacks. At 400 feet above sea level, and set in the heart of the Scottish Highlands, this 18 hole championship course delivers some spectacular views for the players. With a reduced growing season being so far north, Dave needs to maximise the efficiency of the maintenance season so he turned to a Graden CSI and a Redexim Speedbrush, from Charterhouse Turf Machinery for help.

“Because of our high location, we have a more limited window to get maintenance activities done. We don’t usually get good growth until the start of May and it tails off again in October – we just don’t get the soil temperatures” explains Dave. When he joined Spey Valley nearly 3 years ago, there was an issue with moss on the greens which Dave didn’t want to tackle with coring. “I was keen to eradicate the moss using a less invasive method, while still removing a good amount of material.”

Having used a Graden machine before during his time working at a club in Cyprus, Dave decided to invest in a Graden CSI, from Charterhouse Turf Machinery, which was delivered mid-2016. Due to staffing levels, the greens were covered over a period of weeks with Dave delighted at the results. “We removed a good amount of material, some of which we sent off for testing. It showed only 5% thatch which reaffirmed my decision not to hollow core. When using the CSI we used a combination of sand and seed to backfill the grooves and we achieved great germination, despite the work taking place late in our growing season.”

At the same time, Dave took delivery of a Redexim Speedbrush to help him achieve his greens project. “We’d carried out some deep aeration followed by a heavy topdress, and with the damp mornings etc it took a while for the sand to work in – it was evident we needed a piece of kit to work the sand down more effectively.” To date, the Speedbrush has been great for light topdressings following the Graden work and for collecting seedlings and debris from the greens.

“It’s relatively early days but the results achieved with both machines so far are very positive. We’re all looking forward to what can be achieved with a full year and season ahead.”