SpeedSeed 1100 completes fairway recovery: While the drought of the summer of 2018 may be a distant memory for some, other clubs are still feeling the effects of the damage caused.

One such club is Boat of Garten Golf Club in the Scottish Highlands, where Head Greenkeeper Michael Mann is still tending to some of the worst affected fairways. The overseeding of which is now much quicker and easier thanks to their new SpeedSeed 1100 from Charterhouse Turf Machinery. 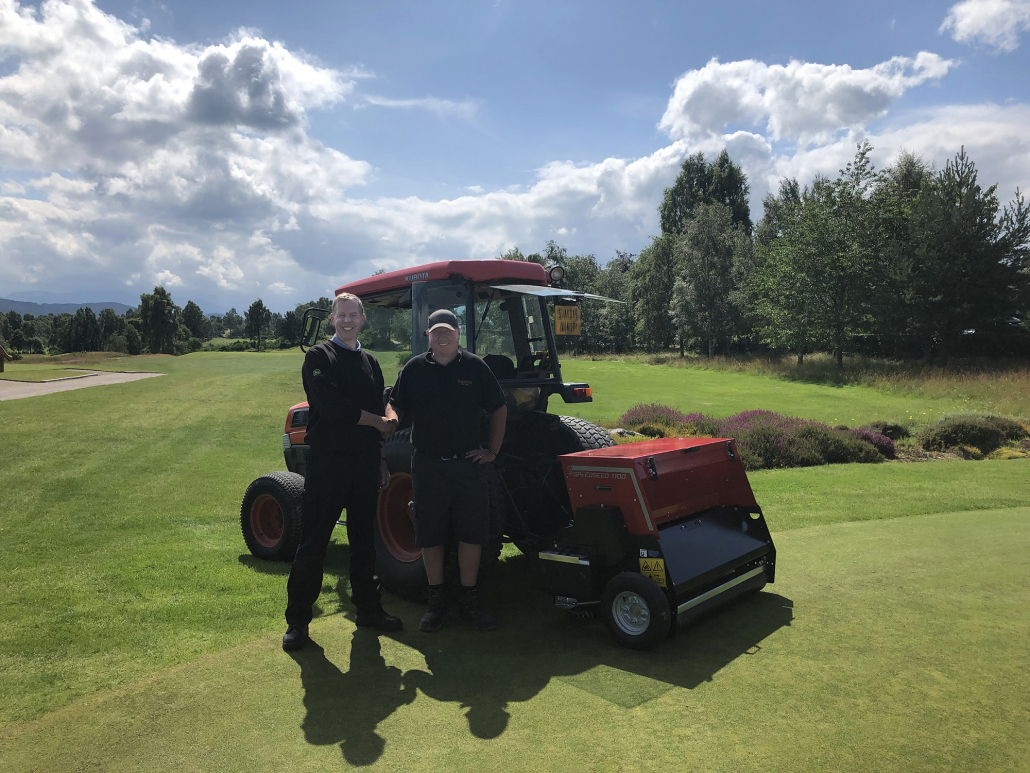 The 18-hole, James Braid designed course is renowned for its challenging play and the cleverly shaped, undulating fairways. “The sharp undulations can pose quite a challenge when it comes to maintenance and finding machinery that can work with the challenging terrain” explains Michael, who has been at Boat of Garten for just under a year. “When we needed a new overseeder, we looked at three or four different makes and models, one of which was the new SpeedSeed from Charterhouse. Its compact size meant it could closely follow the uneven ground, so it worked out to be the best option for us.”

Offering a 1.1m working width, the SpeedSeed 1100 does not compromise when it comes to coverage and performance. Creating 990 holes per sq. metre, with an optional second spiked rear roller to double that, it can cover both large and small areas quickly, working at depths of up to 20mm. “After we took delivery of the SpeedSeed from MacGregor Industrial Supplies in July 2019, we were out with it pretty much straight away, overseeding the greens and some of the worst affected fairways. It’s such a great size, suitable for use site-wide.”

“The set-up and controls of the machine are all nice and user-friendly, and it’s accurate seed calibration system is easy to adjust and operate. It’s a very clean machine, that leaves minimal surface disruption and hardly anything to tidy up in its wake.”

By the back end of 2019, thankfully recovery work reached a conclusion, but Michael now looks forward to utilising the SpeedSeed to its full advantage as we enter the new growing season. “While we don’t have a set overseeding programme, now that we have the seeder at our disposal we can look to capitalise on any growth windows and start to work on other projects around the course – weather permitting of course!”