It’s all in the numbers for The Buckinghamshire Golf Club, which has recently undergone a £3 million course redesign. The course has been lengthened to 7200 Championship yards, 112 bunkers have been redesigned to 64 and the 25-year irrigation system has been replaced with a new Toro Lynx controller with 1275 Flex 35 and T5 sprinklers, ensuring that not an inch of the 226 acre venue goes without a good watering.

Course manager Andy Ewence who has been at the club in Denham for five years says the club has very high standards and the course, which was designed by John Jacobs OBE and is host to numerous competitions, needed some alterations to ensure its position as one of the finest inland course in the British Isles: “We wanted to update some aspects of the course. Lengthening it adds a new challenge for our members and better suits the tournaments we host. We’ve reduced 112 bunkers to 64, relocated the remaining 64 and lined every one with bunker Blinder. We’ve added lake edges to two feature holes and concrete pathways for ease of movement around the course.” 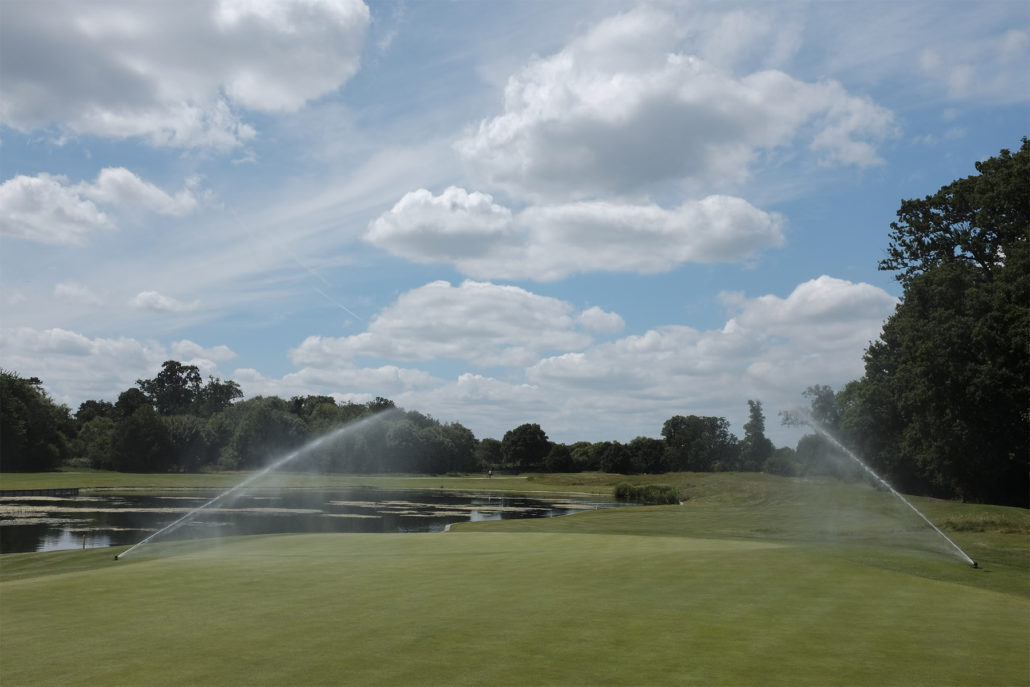 It was while making these changes that Andy and the team decided to replace the irrigation system. Andy explains: “The irrigation system was 25 years old and as a result the PVC piping was turning brittle, it was very unreliable and the computer system needed updating. And all of these factors were visibly displaying on the course. We had dry patches and grass that was turning yellow. Redesigning the course was the perfect time to update the system.”

Andy says the owners were very much behind the investment and encouraged him to seek out “the best”, a decision Andy turned to irrigation specialists Lakes and Greens to help him make. “We were after the highest specification, the full package,” says Andy. “Wall-to-wall sprinklers, a mapping system and Grundfos pumps that work with the controllers were key.

“We are very familiar with the Toro brand as we are on a five-year leasing package for all our turf machinery and the quality is outstanding. But Toro Irrigation was chosen for its own merit and it was the Lynx control system in particular that sold it to me. I’ve been using the system since April 2017 and in my opinion it is the best system I could have chosen, it’s so easy to work with. But the real proof is in the grass, it looks amazing: green and lush and the members have really noticed a difference.” It definitely helps having over a thousand sprinklers working their magic!

Mike Collins, managing director of Lakes and Greens, the company renowned for meeting the standards required by Championship venues, installed the product and comments: “The installation at the Buckinghamshire was achieved in two very tight windows of opportunity, both deadlines were met despite appalling weather conditions in early 2016 thanks to the leadership of contracts director Mark Collins. We enjoy a strong relationship with the Reesink team and its support of the Toro product is excellent.”