Bobcat E10e helps uncover archaeological secrets: A new Bobcat E10e mini-excavator, the world’s first battery-powered machine of its type in the one tonne and below category, has been utilised for its low noise and zero emissions on a prestigious archaeological dig, exploring the ruins of a castle in the town of Ricany near Prague in the Czech Republic.

The romantic-looking castle ruins where the E10e has been working stand in the very centre of Ricany and date from the second half of the 13th century. After the site was evaluated by archaeologists, the operator of the battery-powered E10e excavator was faced with a clear goal – helping to find the castle’s moat and any other historically valuable finds that would help determine the size of the original castle. This involved an in-depth exploration in the garden of one of the buildings adjoining the castle ruins. The task was to dig a main reconnaissance trench with a length of 57 m and another 16 metre long verification trench. 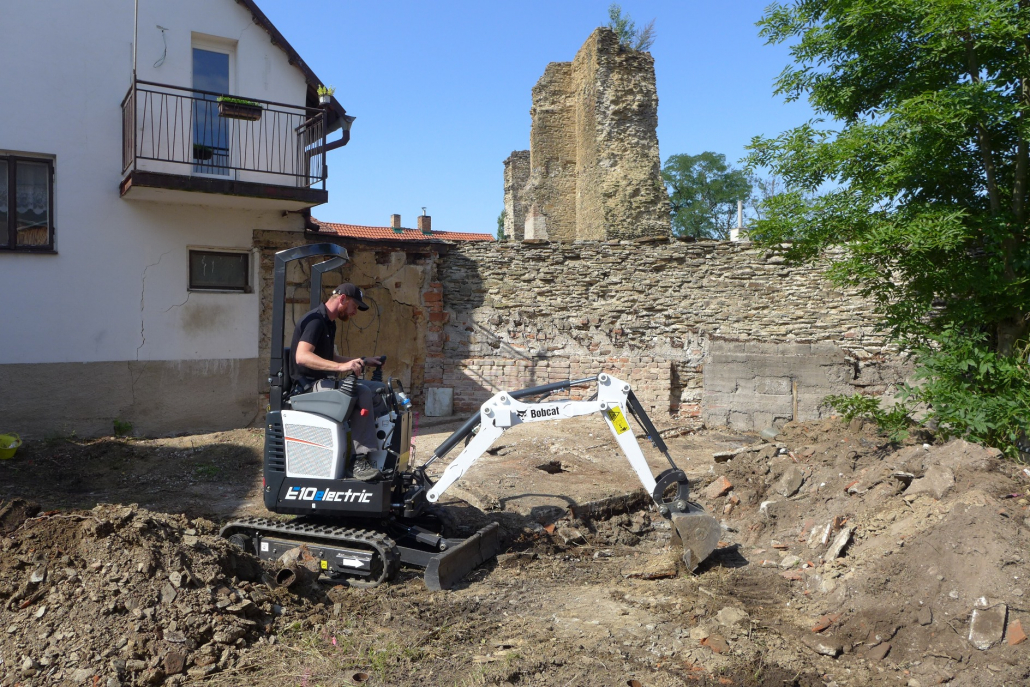 The work was carried out by an experienced Bobcat machine demonstrator, Tomáš Mrkvička, who said: “These very special excavations require the utmost caution. The soil must be removed literally centimetre by centimetre. It is similar to a knife scraping over butter. For actions where it is important not to damage what could possibly be in the excavation, the operator’s feel and touch are irreplaceable.” To ensure that any archaeological excavations were not damaged, the teeth were removed from the bucket at the beginning. Fortunately, the surface of the area being surveyed was not too hard, so it allowed this fine technique to work.

Bobcat E10e in the Role of Discoverer

It turned out that the archaeologists were right to be cautious. After only a few hours of work, the E10e uncovered the point where the soil mixed with the original masonry of the castle. Excavating was immediately stopped and experts from the local museum were called in to investigate the site further and they were surprised to find that the E10e had in fact encountered the remains of an old cellar. “The cellar may be up to 500 years old,” said Jan Boukal, a historian from the Ricany Museum.

Whilst the excavator weighs only one tonne and its weight is evenly distributed over the entire track area, it was still decided that after discovering the cellar, archaeologists would dig only by hand in this area. With the cellar vault located only tens of centimetres below the surface, there was a real danger of it collapsing. Instead, the Bobcat E10e continued to dig along pre-marked lines on another reconnaissance excavation elsewhere on the site.

“The use of a one tonne excavator in combination with an experienced operator proved to be very far-sighted due to the discovery of the ancient cellar,” said Petr Frank from the Municipal Office in Ricany. “We are pleased that we were the first in the Czech Republic to have a chance to try a zero-emission, battery-powered excavator in Ricany. In addition, the ability to communicate seamlessly with experts during excavations due to the low machine noise was extremely useful and efficient. I assume that we will see electric machines more and more often in the centres of towns and villages in the future.“

Electromobility and emission reductions are very important topics today worldwide and alternative drives are being gradually introduced to achieve this in construction machinery. Doosan Bobcat is one of the pioneers in this industry and began producing the E10e last year at the company’s plant in Dobris in the Czech Republic.

The range of applications for this type of excavator is wide – although it is primarily intended for demolition indoors. It is ideal for many other areas where zero emission and low noise machines are required. Examples include construction and refurbishment in city centres, night work or meeting the requirements for work in low-noise locations such as schools, hospitals, shopping centres, etc.

The Bobcat E10e is the world’s first battery-powered one tonne mini-excavator that combines zero emissions, low noise and a width of just 71 cm, allowing it to easily drive through doors or to lift the machine. The excavator is equipped with a modern lithium-ion maintenance-free battery with an advanced control system that is designed to fit the size of a standard machine and maintain zero ZTS overlap.

The Bobcat E10e can work for up to five hours on a single charge depending on the application. With the optional external 400 V quick charger, the battery can be recharged to 80% capacity in less than two hours. This allows the E10e to work throughout the working day when used with normal breaks. The battery can also be fully charged overnight with an integrated 230 V mains charger.

The E10e battery-powered model is built on the same platform and produced on exactly the same production line as the highly successful E10z diesel engine powered mini-excavator, over 11000 of which have been produced so far. This line currently has a capacity of 2000 machines per year and can produce diesel and battery-powered models as required by current market demand.

Róbert Husár, Doosan Bobcat EMEA Director for the mini-excavator product line, said: “The E10e is only the beginning of our efforts to expand our portfolio of alternative-drive machines. In the future, customers will also be able to look forward to high-end innovations, as well as other product lines, such as skid-steer loaders and track loaders.”

For more information about Bobcat and its products, visit www.bobcat.com