Pivotal Point In Club’s History Sees Commitment To Toro With Five-Year Contract. We often hear about how a new course manager or head greenkeeper introduces Toro to a club. Giving credence to the phrase quality is not an act it is a habit, when Dave King moved to Cricket St Thomas Golf Club two years ago from Sherborne Golf Club, now in the middle of its second five-year Toro exclusivity agreement, he set about turning the shed all-red. 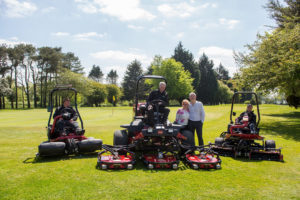 Dave, who is head greenkeeper at the club, says: “You only have to use Toro for a short time to appreciate its quality. At Sherborne I very quickly came to know and trust Toro so when I moved to Cricket St Thomas which was at a pivotal point in its history, I knew I needed Toro to help the team make it a premier golfing destination.”

Up until two years ago, when Cricket St Thomas came under new ownership by a member, it was known as Windwhistle Golf Club. Along with the purchase by Steve Hill and his wife Jacqui came Dave’s appointment, a re-brand and a major investment in the future of the club. Dave says: “The club has already undergone quite the transformation since it was bought, but there’s plenty more to come. There’s an ongoing plan to redevelop and reconstruct areas of the course and new machinery was required for this. I believe in Toro and was happy to commit to the brand in a five-year rolling plan.”

Involved in stage one of the plan are a Toro Groundsmaster 4500-D bringing says Dave a “wider cut to the roughs”, a Reelmaster 3100-D “for bank work” and for a precise, fine finish on the greens courtesy of the time-tested Greensmaster 3250-D.

The agreement was negotiated by Elliot Wellman from Devon Garden Machinery who has more of an understanding of the club’s requirements than usual for a dealer, having worked at the club for 16 years as a greenkeeper! Elliot says that these machinery choices are ideal for the club and its ambitions: “Knowing the club as I do and with an understanding from Dave of its ambitions for the future, these choices are wise ones. It’s incredibly exciting watching the changes the club is making; it’s now one of the most successful clubs in the area, which is a great achievement for all involved. It was also a real thrill for me to be involved in making the deal.”

It’s not often you come across a club which has the support and backing of a member as its owner and an ex-employee as its dealer. The understanding that this combination brings to the running of the club alongside a talented head greenkeeper such as Dave will undoubtedly bring it even greater success in the next two years.