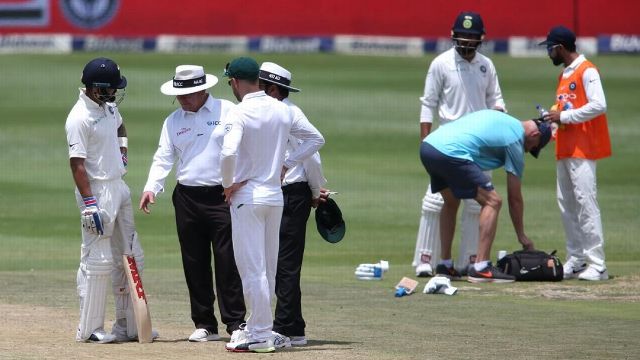 Made-To-Order Pitches Continuing: South Africa will continue to ask home curators to prepare surfaces to favour their pace pack even though they did not get the pitches they wanted for two-thirds of the series against India. Only Newlands provided the pace, bounce and movement South Africa would have liked while SuperSport Park was slow and took enough turn to be called “subcontinental” by the hosts and the Wanderers had so much variable bounce and exaggerated movement that the umpires took players off the field on the third afternoon and the venue could face potential sanction.

Captain Faf du Plessis has expressed his disappointment at both Highveld venues but instead of backing off, emphasised the importance of groundspersons working with team management to prepare pitches that can help South Africa.

“You must try and get – whether it’s one percent or five percent or ten percent – whatever you can you must try and get an advantage against opposition that’s quality. When we go to India, we certainly don’t play on flat, green tracks. And I assume that there would be a similar conversation happening there,” Faf du Plessis said. “For me it’s just making sure that there’s a conversation happening with the management of our team and also the groundsman about the conditions that would be ideal for a Test series. This Test series we didn’t get that, and I can’t give you the reason for that.”

One theory is that the constant talk of pitches – du Plessis has been more vocal about it than any other South African captain – has placed extra pressure on curators to produce bowler-friendly pitches and they are veering to the extreme. And there is some evidence to support that theory.

After SuperSport Park’s Bryan Bloy, who had prepared his first Test pitch, came under severe criticism from the team, the Wanderers’ Bethuel Buthelezi, who has worked at the ground for three decades and been head groundsman since 2016, produced a pitch that Kepler Wessels described as “dangerous” and on which batsmen from both sides got hit.

Asked whether the reaction to SuperSport Park could have put pressure on the Wanderers to go completely the other way, du Plessis conceded that it may have had that effect but still put the responsibility on the groundsman to do a better job. “That might be. But I’m in an environment where I have to score runs and perform, so it’s the same,” he said. “If there is an option to get a pitch in the way that we want to, you would hope that the experience would be there to get the pitches right.”

Again, du Plessis insisted South Africa did not ask for anything “excessive,” and only wanted the curators to stick to what the country is known for. “We never asked for something excessive. We never asked for extra grass. All we asked for was a typical South African wicket that has pace and bounce,” he said. “Although this wicket had pace and bounce, it was obviously a lot more, so we pretty disappointed with that. It’s disappointing to see that once again we’re not getting it right. I don’t know how to answer it or how to change it, but it obviously needs to improve.”

Du Plessis has already suggested that the CSA appoint someone to oversee curators around the country and that a national strategy that will avoid producing pitches like those at SuperSport Park and the Wanderers and even the ones South Africa played Bangladesh on earlier in the summer. In September-October 2017, South Africa played Bangladesh in Potchefstroom and Bloemfontein on flat pitches whose placidness surprised even the visitors. There has been no word from CSA on if they are considering du Plessis’ request.

More immediately, they will concern themselves with whether the Wanderers will be punished for its pitch. Team manager Mohammed Moosajee said he is expecting “repercussions”, and du Plessis hopes they won’t be too serious. “Look, I think because we finished the game, I don’t think that will happen,” du Plessis said. “I understand the demerit points if the game was called off, or if it was an absolute stinker that lasted two days, then your demerit points would get a bit more. So I assume that even if this pitch was rated poorly, you’d still be able to come back here for Test cricket.”

South Africa are scheduled to play Australia in the last of four Tests in Johannesburg from March 30 to April 3. Before that, the venue will also host an ODI and a T20I against India, which are likely to go ahead even if the most severe sanction – a ruling of “unfit” and a 12-month ban – are imposed, because of timing.

While the match referee may submit his report immediately, the home board will receive the ICC’s ruling within 14 days of the Test finishing, which will take the process to February 10 at the latest. The CSA will then have a further 14 days to appeal, which means the matches against India, which are both sold out, should go ahead. A ban could affect the Australia Test and any demerit points will hang over the venue’s head for the next five years.