Council Sees Efficiency Soar Thanks To New Toro Mower – Uttlesford District Council’s decision to opt for Toro’s LT-F3000 flail when the need arose for a new grounds mower to tackle the area’s parks and open spaces is one that has made a significant difference to productivity and efficiency. 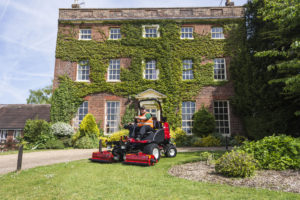 The LT-F3000 is expected to maintain 760,000 square metres of parkland and open spaces per month and Steve King, Uttlesford’s street services supervisor, says it was evident that the LT-F3000 was “more than up to the task” straight away as it began having “a notable impact on the efficiency of the workforce” within just two weeks.

Steve continues: “We’ve been using the flail for two weeks now and it’s already having a notable impact on efficiency. We’re finding the LT-F3000 is capable of achieving the same amount of work that we would otherwise have to bring three dedicated mowers in for. This level of versatility in one mower has significantly improved the team’s productivity rate.

“Our previous machine’s cutting width was 1.7m, but the new mower boasts a 2.12m cutting width, which has enabled us to cut down on operating times. We’ve also found that the flail’s three cutting units follow the contours of the ground better than our former single unit machine, resulting in a superb after-cut appearance.”

This high quality finish is achieved no matter what the length of the grass is to start with, says Steve: “Long, short, wet, coarse, the result is always great. The LT-F3000 can easily cut meadows, the height of cut just needs to be adjusted, and it’s very good with small bank work as it’s solid and stable.

“It’s easy to transport too; the front units can be tucked up out of the way and secured by good, sturdy fixing points so towing is safe and fast. With this feature, the machine can be moved from site to site hassle-free and we can now access trickier sites which were previously impossible. We are looking to get the machine road registered, so it could be even more productive!”

Uttlesford District Council’s grounds maintenance division prides itself on delivering a high level of service to its residents and every machinery choice is made with a great deal of care. Steve says: “We considered a variety of different machines, but the Toro shone through by promising to deliver everything our sites demand. It’s great to see this translate to our working day and the results we are producing.”

If that weren’t enough, “the professional manner of Reesink Turfcare’s representative Danny Lake cemented our decision,” says Steve. “He was very personable and really cared about helping us choose the best investment for our needs. Reesink’s customer service has been absolutely fantastic throughout, with any queries handled quickly and efficiently.”

Uttlesford District Council’s grounds team of nine replaces its machines every seven years and welcomes this as an opportunity to consider new technology to improve the already high level of service it provides to the residents of Uttlesford. In choosing machines like the Toro LT-F3000, which the council has found has the capability to do the work of three machines, it seems fair to say Uttlesford District Council is making all the right choices.