The famous Westward Ho! club, which is the oldest golf course in England, suffered flooding across three holes after vandals broke open a water hydrant. 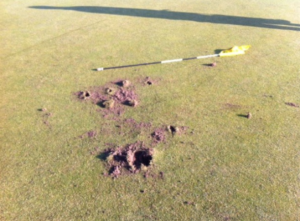 Flags were also used to pull up turf on the greens.

The club has reported the incident to the police and said it intends to prosecute the offenders if they are caught.

General manager Mark Evans said the ‘mindless vandalism’ was the worst the club had suffered in living memory.

“We are lucky in some ways because we don’t usually get it.

“It’s just wasting everybody’s time having to repair something they shouldn’t have to.

“We found it at 6 o’clock this morning when the green keepers got to it and we think it must have happened between nine and 10pm last night by the amount of water.

“They’ve opened a hydrant and everything was flooded quite badly. You know you’ve got a problem when the bunkers are holding water.”

The bunkers have been taken out of play at the golf course until the damage can be rectified.

Green keepers spent four hours on each of the three flooded greens to make them playable, but Mr Evans said they can take six months to return to normal.

Anyone with any information about the incident can contact the police via 101@dc.police.uk, or by phoning 101, quoting crime reference CR033334-17.

Information can also be passed anonymously to Crimestoppers via 0800 555111 or www.crimestoppers-or.uk