Dutch Stadium Praises INFINICUT: A renovation of stands at Holland’s De Adelaarshorst in 2015, saw the start of new opportunities for Go Ahead Eagles FC and its Head of Operations Ronnie Janssen. With its new capacity of just under 10,000, the stadium was one of the host venues for the 2017 UEFA Women’s Euro Tournament, which is also where Ronnie had his first experience with the Cub Cadet INFINICUT® mowers. With the generous backing of the supporters club, they were able to purchase their own fleet of two INFINICUT® 34’s at the end of 2017.

Founded in 1902 and currently playing in the Eerste Divisie, the club has produced a number of notable players through its academy programmes, as well as giving a number of ex-players their first opportunities as trainers and managers. “When we were in preparation for the Women’s Euro’s, UEFA strongly recommended we mow by hand so we looked around at the world of pedestrian mowers” explains Ronnie who has been in his current role for 16 years. “Our club advisor had seen the INFINICUT® mowers in action at FC Utrecht so we hired two units for the duration of the tournament and our grounds team, lead by our Field Manager Branco, were very impressed.” 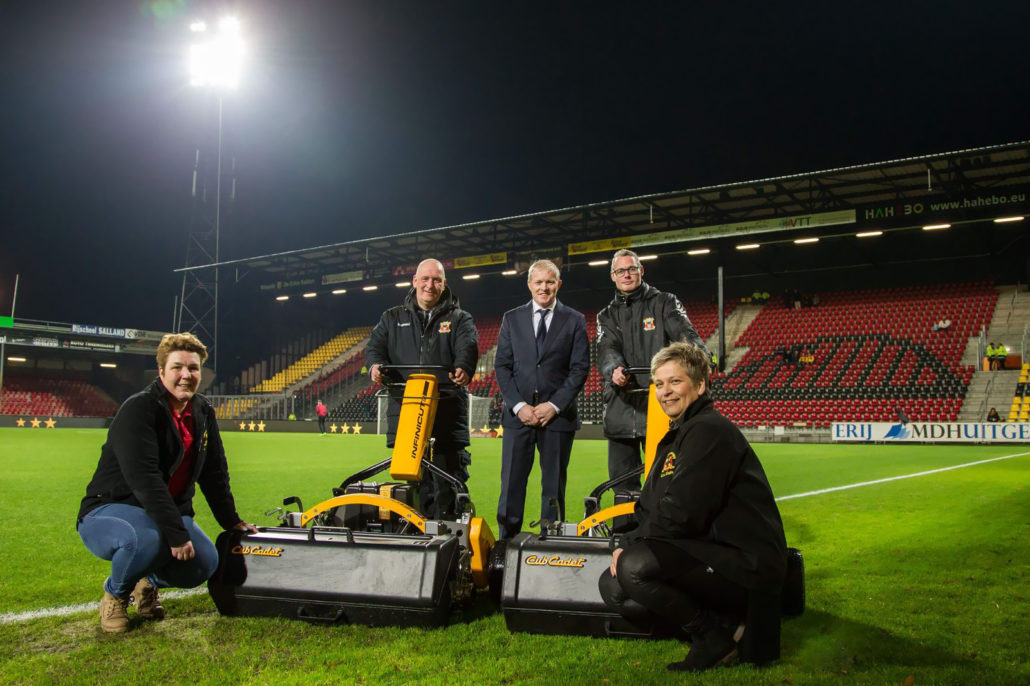 “With the fantastic results we achieved on the pitch, we were keen to buy our own following the event but didn’t have the money at the time. Our fantastic Supporters Association, who do a lot of great work for us, then came together and paid for two INFINICUT® 34” mowers” which were delivered in November 2017. “The battery powered operation is something we particularly like, as well as the fact you can also get a cassette system to fit, for a variety of turf applications.”

Ronnie, Branco and his team of volunteers achieved fantastic results with the mowers throughout the 2017/18 season, receiving top marks in the league for their pitch multiple times. “Since using the INFINICUT® we have not looked back – the machine operates in a new way to any other mower and has improved the quality of our pitch. We couldn’t have achieved this without the generosity of our Supporters Club so it’s really a big thank you to them.”