G860 Combats Heavy Usage At Huish Park: With over 50 games a season taking place at the Huish Park Stadium, Yeovil Town FC’s head of grounds Richard Allsworth believes that his new Dennis G860 is the ideal mower to maintain such a heavily used pitch.

Richard has been head of grounds for Yeovil Town FC for the past four years and, along with one other member of staff, tends to the pitch at the main stadium, the first team training ground and the club’s academy facilities.

“With league and cup games, along with the youth FA Cup and academy games we have at least 50 matches here throughout the season. Plus, this season the ladies team will playing their home games here so that’s probably another nine games. It is busy but it has to be in these leagues – it’s a necessity in order to generate income. Yes, it can make things difficult but I came from the Memorial stadium which shared rugby and football (Bristol Rovers FC and Bristol Rugby).” 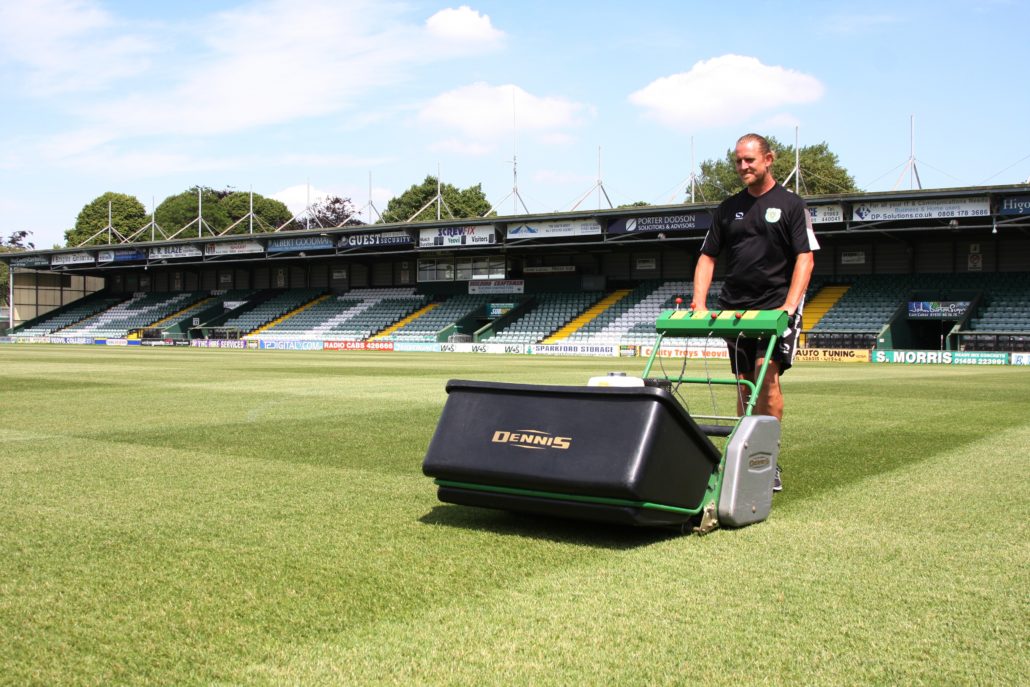 It was at the Memorial Stadium that Richard first started using the Dennis G860 mower, and based on his experience; there was only one mower he had in mind when it came to purchasing a new one.

“There is absolutely no contest when looking at mowers. I like the familiarity of having used one for nearly 20 years. It’s always been a fantastic mower and over the years has been subtlety refined – it’s a little bit quieter, a little bit smoother and I like the fact that the box lifts off so you can empty it easily. Essentially it is one unit that you can do lots of jobs with and it doesn’t take much time when adjusting the height of cut or changing cassettes.”

As Richard says, the Dennis G860 comes complete with an interchangeable cassette system in which the user has the option of fitting eleven different types of heads including scarifiers, verticutters, brushes, spikers, and slitters as well as six or eight bladed cutting cylinders.

As part of his maintenance programme, Richard relies on the 8 bladed cutting cassette to get the pitch ready for matchdays. He’ll carry out a double cut on a Thursday, followed by a double cut on a Friday and ensure that grass is at a length of 27mm before kick-off.

He also reported excellent results from the verticutting cassette, which he uses at both the stadium and the training ground.

“I absolutely love the verticutting cassette for grooming the pitch. I tend to use the verticutter once a month before I put down a liquid feed just to clean it out – so that I can expose the leaf, and expose the soil to keep it clean – which is necessary when so many games are played on it.

“I always do it more often in July to really thicken up the turf especially about a week and a half before the first game. It just helps me see exactly how thick the sward is and to give it a chance to fill out.

“We also have real problems with poa annua on both the stadium pitch and the training pitches as there are meadows and silage nearby so it just blows in. Just as the poa is starting to come through I’ll go over it with the verticutter cassette just to try and control it – it works really well.”

With the G860 offering so much versatility in just one machine it is easy to see why they are used not only by professional groundsmen at FIFA World Cups or prestigious sporting stadia, but also by clubs in lower divisions and volunteer groundsmen who tend to local clubs and grass roots pitches. In fact, Richard believes that the G860 proves a cost effective solution for all types of various groundsmen.

“Could I afford to go and get a mower for verticutting and a separate mower for scarifying? Probably not – therefore the G860 offers you the perfect solution.

“It’s light, it is manoeuvrable and it gives a definite stripe. It’s great for presentation and we are presenting the club’s image – the G860 is the perfect mower for this.”