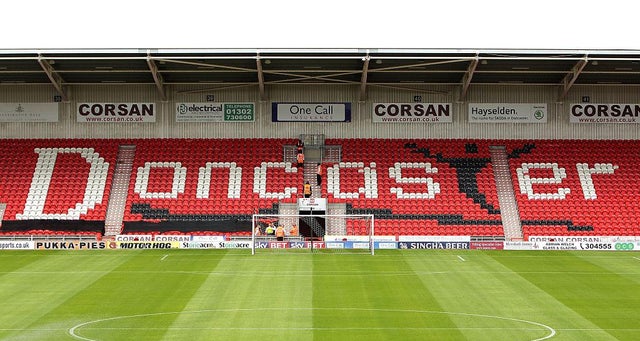 Groundsman keeping Keepmoat pitch ready: The pitch at the Keepmoat Stadium would be ready for Doncaster Rovers with just a couple of days notice – but that has been no mean feat during lockdown.

Operating in an environment of uncertainty with football and rugby league halted due to the Covid-19 outbreak, head groundsman Andy Thompson and his depleted team have done all they can to ensure the pitches at their disposal are primed for use.

“All the areas that were devoid of grass a bit over the winter months have filled in.

“We’ve been able to continue to maintain the standards that we’ve got by cutting daily, applying chemicals and fertiliser, raking and grooming when we need to.

“And that’s been at the training ground and the ground as well.

“To be honest it’s ready now. If someone said we were playing on Monday morning we’d be ready.

“We’ve kept it in the best standard that we can going forward because like everyone else, we don’t know what is going to happen next.”

It is expected that the remainder of the League One campaign will be cancelled in the coming days, with attention then turning to a possible start date for the 2020/21 season.

For much of the nine weeks since the last matches were played, there was a strong intention that competitive action would be resumed in the summer.

Such uncertainty calls for the most sensible option to be pursued as plans are prepared.

That has been no different for ground staff – though it has come with its challenges.

“It’s been difficult for materials because a lot of the suppliers that we’ve got and machine parts, they’ve furloughed all their staff,” said Thompson, who first started working for the club in 1998.

“We’re just trying to find a happy medium and balance the best I can, spotting any issues before they become big issues.

“If there’s any disease in the pitch I’d rather not spray it because I can’t get hold of any chemicals and then we just have to manage it the best we can.

“It’s good because proactively we’ve got to look at managing finances the best we can, especially when we’ve got no money coming through.

Club Doncaster took the decision to place the majority of staff on furlough to help offset the lack of income during the shutdown of sport.

With year round work required to maintain playing surfaces, Thompson’s department was less affected than others but he is short of a few bodies.

And working within social distancing restrictions has proven difficult also.

“Out of the five staff that we’ve got we’ve only got three working across the two sites, which has been fine in the main,” he said.

“Cutting grass can be a long, laborious job sometimes so having a cup of tea with someone and a bit of a chat, winding each other up is good. You miss that sort of interaction sometimes.

“It’s been strange at the ground. There’s two of us and we’ve had breaks at different times. One person works in one half of the pitch, the other in the other.

“It’s been hard with the machines, cleaning them down after every use, just to try to limit any issues there might be working with someone.

“It’s hard to social distance when you’re working, even though we’ve got 8,000 square metres out there.

“We’ve been trying to do that the best we can.”

Typically, at this time of year, Thompson and his team would be putting final preparations in place for the renovation of the pitch at the Keepmoat.

Each year, in a period where home fixtures for Doncaster RLFC are cleared, a process taking several weeks begins where the playing surface is cleared and reseeded in time for the start of the next football season.

As things stand, and with the decision to end the season early likely, the usual plans look set to be largely unaffected.

“We’d planned it around the fixtures and the concert [The Killers were due to play the Keepmoat on May 25],” Thompson said.

“It was all booked in and ready to go for the early part of June. I’m still pushing to get it done.

“A lot of clubs, higher up than us, have taken the plunge to do renovations early, knowing that there would be no games in the stadium for five or six weeks. They saw it as an opportunity.

“We looked at it as if we did that and the players did come back, we could end up having to do two renovations. That would be counterproductive, especially financially.

“From our point of view, we’ve got to plan normally that the season was going to end in June.

“A lot of groundsmen are starting to panic because they would have done their renovation work in early May when the season finished. But because of our usage, we don’t usually do our renovation until June any way.

“For us it’s about waiting for a decision from the EFL saying we’re going to do this and then getting the nod from the powers that be to do the renovation.”