Groundsmen Defend Wimbledon Courts: It’s the oldest excuse in the Wimbledon book – if a tennis match doesn’t go your way, blame the grass. But this year the lovingly-manicured lawn has been subject to a particularly loud chorus of complaints, leading to concerns that the hot, dry weather has made it dangerous going in to the second week of play. 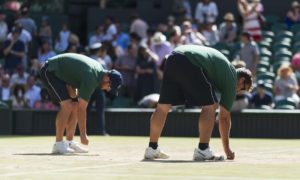 On Sunday, the only day of rest for the beaten-down blades, All England Club staff were working to restore the courts to their earlier glory before the busiest day in the professional calendar.

Geoff Webb, CEO of the Institute of Groundsmanship, emphasised how the courts had been “prepared to the same meticulous standards as previous years”.

Webb said: “Any player who slips and gets injured will create a high profile discussion in the media, after all it is Wimbledon which is a unique tournament in the Grand Slam calendar as the only tournament on a natural surface. Players therefore experience a different set of challenges. The reality is, it is for the players to adapt to the surface conditions which are the same for every player.”

He said the rest day on Sunday gave the Wimbledon grounds team a chance to conduct some spot treatment, hand watering focused on the extremities of the courts and any necessary irrigation. Head groundsman Neil Stubley and his team will tend to the grass ahead of Manic Monday, when the top four seeded male players – Andy Murray, Rafael Nadal, Roger Federer and Novak Djokovic – will all be playing matches.

“The courts at Wimbledon are arguably the most technologically advanced courts worldwide and we know that the team at Wimbledon in preparing the courts each year leave nothing to chance,” added Webb.

Monday will also bring with it the first rain showers of the tournament, predicted for the afternoon, which, while not such good news for the tennis, will bring some much-needed moisture to the grass.

Dave Saltman, managing director of Pitchcare, an organisation for groundskeepers, said that when it came to Wimbledon, issues with the grass were as much about the players thanas the gardening.

“The thing to remember is that a lot of players, particularly from abroad, are still not that used to playing on grass – they only play a few matches on it a year – and the court surface is always the first thing players will complain about if things go wrong,” Saltman said. “We groundsmen have got used to taking the blame, we’re a thick-skinned bunch.

“This hot dry weather obviously does have an impact on the grass, it means the courts reach drought conditions in one day, regardless of how much it is watered the night before. But I have never seen the integrity of the ground at Wimbledon start to break up, even when it’s been hot and there’s less grass cover, so I don’t think there’s anything to be concerned about, the courts will certainly be sustainable for the next week of play.”

Players including Federer, Djokovic and Murray all passed comment on the supposedly dry, hard and slippery condition of the grass, with the blame falling on the long spell of hot weather the south-east has experienced over the past two months.

The weather in the first week of play was also unusually warm, with the sun beating down constantly and temperatures regularly hitting the high 20s, which took a noticeable toll on the grass, particularly around the baselines. On Friday the club took the unusual step of putting the roof over Centre Court – usually reserved to protect from the rain – to shelter the grass before play began.

Speaking on Saturday, Federer said that he had already slipped on the court but that he “didn’t feel like it was unsafe”.

“I think when it does get very hot, the sun beats down on the court for the entire day, I do feel the courts get a tad slippery because there’s all this dead grass, in the middle in particular, because it’s not attached any more,” said Federer. “I feel like that’s sort of the slippery place sometimes.”

Murray also said the he felt the courts “weren’t in as good a condition as last year”.

“There’s quite a few spots on the court, like just behind the baseline and just in front of the baseline, where there’s quite big lumps of grass, sort of almost like little divots there.” He added: “It’s been pretty hot, pretty extreme conditions. Not much rain. So I don’t know if that’s affected it … I think it’s just getting a bit beaten up early.”

Murray was joined in his concerns by fellow Wimbledon champion Djokovic, who said he had heard others complaining about the conditions. “I was hearing a lot of comments from the other players,” said Djovovic. “They were complaining, especially on the outside courts.”

He added: “I could see there is a difference in grass, in the turf itself. It was a bit softer, I would say, especially around a couple of feet inside and outside, around the baseline area. I haven’t had that kind of experience before in Wimbledon, to be honest.”

French player Kristina Mladenovic asked for officials to intervene on safety grounds over the “damaged” state of court 18 after she suffered an injury, while Italian Fabio Fognini said bluntly: “I think the courts this year are really, really bad.”

Speaking on Thursday, Stubley, only the eighth groundsman in the club’s 146-year history, said the dry conditions presented a challenge, but stressed that he was in no doubt the grass courts would be in a good enough state going into the second week of the tournament.

“There’s not a doubt in our minds that the courts will not be as good as they need to be for the end of The Championships,” said Stubley. “Obviously we’re dealing with the extreme heat, which we’re not used to. We go into The Championships with as healthy of grass as we possibly can so we can endure those extremes. So if we get extreme heat, or last year with the extreme wet, we can deal with it.”

He said it was “just about making sure the hardness doesn’t get too hard” and questioned the complaints of the players. “More slippery? I don’t know if there’s been more slips this year or there’s just been a couple of high-profile ones,” said Stubley. “We looked at the baselines and the areas that they thought there was an issue. We didn’t feel there was. The Grand Slam supervisor and Assistant Referee didn’t believe that there was either.”

It is not the first time that the ire of players has been directed towards the grass. In 2013, many competitors claimed that the ground was “dangerously slippery” after seven players were forced to withdraw after injury. That year, it was the wet humid weather that was blamed for the supposedly overly-moist surface, though that was dismissed by Stubley.