Hyde’s Promotion On GreenFields Pitch: Hyde United FC are celebrating after an immense second season in the EVO-STIK North, played on their GreenFields MX woven pitch.

Installed between seasons, Hyde United converted from a natural grass pitch to their 3G surface back in August 2016. In less than two years they have seen their revenue increase substantially as a result of pitch bookings and are celebrating their promotion, which they also credit in part to the 3G pitch due to the first team being able to both train and play on the surface. 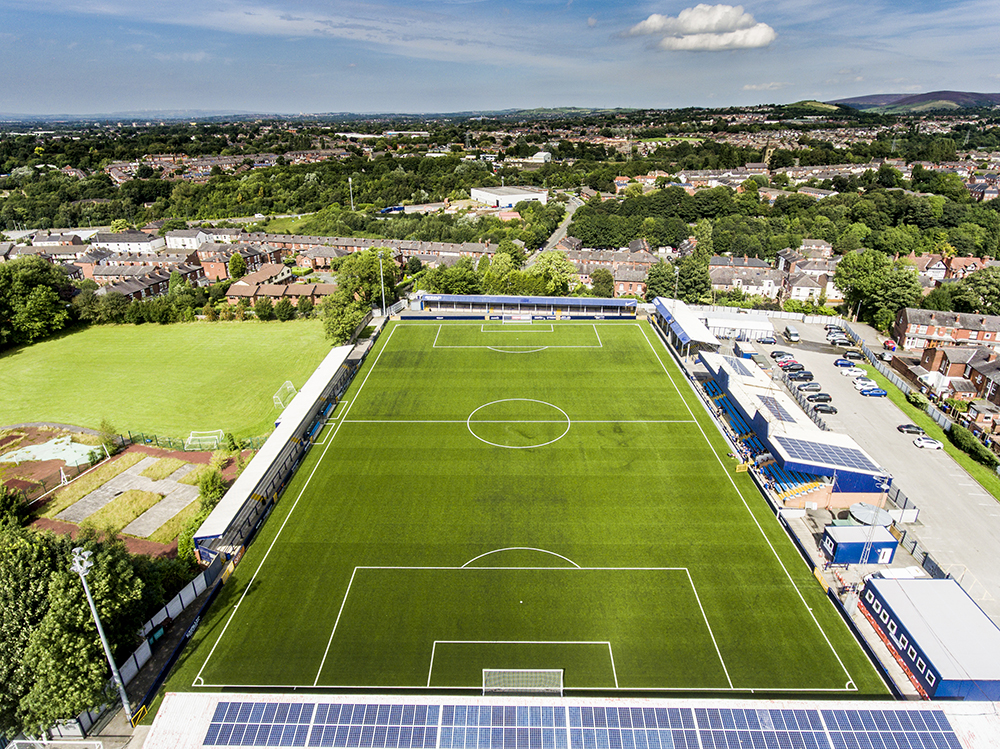 With an unbeaten home record this season under their belts it seems Hyde’s luck is changing after previous relegations which saw them move from the Conference League (now Vanarama) to the EVO-STIK North First Division.

Coming to the end of the first season as EVO-STIK NPL Pitch Partners (providing advice and support to 68 clubs across the North of England) and with an ongoing partnership at Hyde United, GreenFields Director Paul Milton commented: “We couldn’t be happier for Hyde United, they are a fantastic community club and have transformed themselves over the last two seasons which we are pleased to hear is partly due to the 3G pitch. Next season will see them play in the EVO-STIK Premier Division and we will be supporting them throughout and cheering them on to be successful again.”

To celebrate their promotion and cheer them on to maintain their unbeaten home record, GreenFields attended their last match of the season on 28 April and presented them with a £1000 cheque to be used towards sports equipment to support the club in the next season.

Pete Ainger, General Manager at Hyde United FC commented: “”Coming to the end of our second season with the 3G surface, I can say with certainty that it has proved its worth both in terms of Club and Community benefits. It allows us to make full use of the stadium seven days a week, operating a DOE-approved Academy education during the weekdays, school and community sessions plus some commercial usage during most evenings and weekends; that will continue throughout the summer months too. The skill, expertise and customer service from GreenFields has also been excellent. The quality of their surface is without question and tested annually to FIFA PRO quality standard; thankfully a waterlogged pitch for us is now a thing of the past!”