Nominations Open For 2017 IOG Industry Awards. Nominations are now being accepted for this year’s Institute of Groundsmanship Industry Awards, with 22 categories of entry recognising the passion, dedication and challenges faced by grounds staff in both grassroots and professional sports, and including a series of new and ‘refreshed’ categories in response to industry feedback. 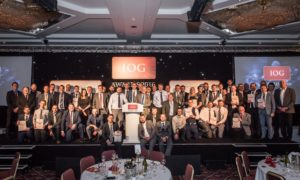 [] The Private Members Sports Club Grounds Team of the Year, and

[] Two awards for the IOG Professional Football Grounds Team of the Year, to ensure recognition for grounds teams at clubs at all levels. One award is for English Leagues 1 and 2, Scottish Championship and Leagues 1 and 2, and Ireland and Wales Professional Leagues. Another award is for grounds teams at clubs in the Premier League, the Championship and the Scottish Premier League.

The ‘refreshed’ Lifetime/Outstanding Achievement of the Year Award will honour those who have contributed greatly to the groundscare industry over a period of time, short or long.

Importantly too, the Special Recognition Award (which replaces the Unsung Hero Award) will acknowledge extreme dedication – perhaps performed under the radar – for the good of groundsmanship at any level.

Commenting on the 2017 competition, IOG chief executive Geoff Webb says: “Now in their ninth year, the IOG Awards continue to expand and, importantly, take account of views that will help to improve them year on year. We have, for example, created more opportunity for greater recognition of those working in the lower divisions of professional football. And by redefining the unsung hero and lifetime achievement awards, we are recognising the work of those who sometimes operate under the radar.

“In addition, we are also making it clear that applications to every category are encouraged from Scotland, Ireland and Wales, as well as England.”

He adds: “These are the only awards for groundsmen that are judged by groundsmen, and we are lucky to have a dedicated group of volunteer judges with their range of backgrounds that encompass the diversity of the industry and profession today.

“The awards are truly all-encompassing and recognise both volunteers and professionals across all levels of sport. So, please take the time to nominate, as you must know many deserving candidates and great examples of sports turf management at every level.”

The awards will be judged by an independent, expert panel using criteria that will include equipment utilisation (including the use of IT), training and education, community involvement and career achievements. However, the winner of the Lifetime/Outstanding Achievement Award will be decided by the IOG, while the Ransomes/DLF Johnsons Alex R Millar Groundsman of the Year Award is decided from the winners of the professional grounds team awards.

The winners will be announced Oscar-style at The National Conference Centre, within the National Motorcycle Museum, on Wednesday 1 November, on the evening of the opening day of the SALTEX exhibition at the Birmingham NEC.