Laurence Gale takes a look at the implications of the current dry spell. 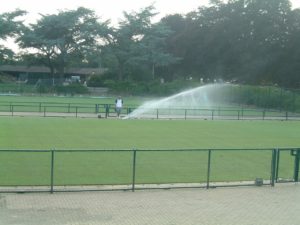 As a practising gardener/groundsman, I cannot remember having experienced such a dry winter and spring as we have experienced this year. It is likely that 2017 will go down as one of the driest springs on record, indeed, a recent report in The Telegraph states that Water companies have warned that parts of UK could see a drought this summer after the driest winter in more than 20 years.

Having spoken to many of our leading industry groundsmen, they themselves have, also not experienced such a dry winter/spring period. In some parts of the country many cricket grounds are witnessing many new batting records being set in April, resulting from the exceptional dry weather

Lack of rain over the autumn, winter and early spring has left some rivers and reservoirs, particularly in the south and west, with dwindling levels. With weather experts warning that there is little sign of rain to come, many farmers and gardeners are desperately watering their crops as the ground dries out. Until now water companies have played down talk of hosepipe bans, but as the dry weather continues the public has now been warned that restrictions could be on the way in some areas unless reservoir levels are replenished by prolonged rainfall.

Kent and Sussex are almost entirely dependent on groundwater from rain. A spokesman for Southern Water said: “The winter of 2016-2017 was drier than average, particularly in the months leading up to Christmas. This means there are lower water levels across our regional water sources.”

Water companies say work has started with farmers to reduce the impact of the continuing dry weather as summer approaches. Environment Agency officials have admitted that the dry weather could lead to drought management measures’ for some regions.

Britain has experienced parched weather in the six-month period between October and March – the driest since 1995 and 1996, according to the Met Office. According to long-term forecasts, the next three months will also be dry, making water restrictions likely.

Nowadays, irrigation is an important and integral part of the turf grass management industry, especially as the demand for better quality playing surfaces has increased. This demand has been largely due to extensive televised coverage of major sporting events. Seeing immaculate aesthetically presented golf courses, football, rugby pitches and horse racing courses has increased the expectations of the players and viewers. 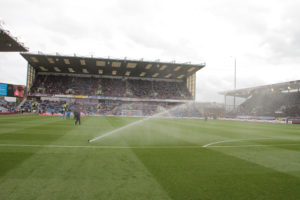 Most, if not all, professional sporting facilities have irrigation systems of one sort or another. Without them they would not be able to prepare and maintain their playing surfaces.

Water is influential in all chemical, physiological and biological processes of plant growth. The soil/plant water relationships is critical to the sustainability of any grass plant. Having an understanding of these relationships is critical. All grass plants are a continuum of water movement. Over 90% of the plant’s water requirements are transported through the plant from the soil profile, via the roots and stem tissues into the leaves and out into the atmosphere. Knowledge of these relationships is important when designing and operating irrigation systems. The main aim is to achieve a water balance within the soil profile ensuring that the grass plant is able to access available water from the soil.

Technology has moved on, and we now see a wide range of irrigation systems from stand alone, self-travelling or boom sprinklers to computer controlled high tech pop up gear driven or jet sprinkler systems able to deliver precise amounts of water. Today many of the top golf courses have what is called wall to wall irrigation systems designed to irrigate greens, tees, approaches and fairways, enabling the course manager to have full control of his watering requirements.

These systems do use a lot of water, albeit more effectively, so consideration needs to be given to the resource available. Is it mains, borehole, well, river or lake water? In most instances an abstraction licence will be required to obtain this water even though the source may be on club owned land. Irrigation constitutes a major user of water resources at times, and in places, when resources are often at their lowest, such as the summer. Incorrect use of irrigation can lead to a waste of water and, in turn, can cause other problems such as increased drainage water, often resulting in the leaching of nitrates into watercourses with the possibility of pollution.

In recent years the Government has brought out a number of laws and regulations regarding the use of water resources. Irrigation can impact upon the environment in two main ways; by depleting the surface and ground water resources and, secondly, by encouraging the leaching of nitrates from the soil to the ground water. Water used to irrigate crops and turf will often not return to the water course but will be taken up by the plant and returned into the atmosphere. Thus, during dry periods, water ground supplies can be severely reduced. Leaching occurs when the soil is wetted beyond field capacity and water drains from the root zone. This drainage water contains nitrate in solution which will eventually be carried to the drainage ditches or ground water. The main risk periods for leaching are in the spring when nitrogen has been applied to the crop, and in winter when nitrate remains in the soil after harvest, and drainage is at its maximum.

So, what can you do to save water and ensure we are using water more efficiently?

Mulching helps conserve water. On bare ground about sixty percent of the water can be lost through evaporation. A 75-mm layer of mulch will help hold onto the water so the plants can use it.

When watering, a thorough soaking to wet the soil to a depth of 150-200mm is much better for plants than light frequent watering. Between 20-30 litres of water applied to one spot under the canopy of trees or shrubs should thoroughly saturate the root zone in that location.

Again, when watering lawns and sports pitches, apply enough water to thoroughly soak the soil to a depth of 50mm, an efficient irrigation program on turf should not begin until the lawn grass shows signs of moisture stress. Symptoms include a dull and bluish-green colour and leaf blades folding. The most efficient time to irrigate is between sunset and sunrise because of less evaporation, less wind and lower temperatures. Early morning is the next most effective time to irrigate while midday is the least efficient.

Also avoid fertilising drought-stressed plants. Fertilisers are chemical salts and will actually dehydrate roots when water is in short supply. If you need to apply a pesticide, make certain the plant is not wilted at the time and spray during early morning or late afternoon. You should also avoid unnecessary pruning of plants during drought. Pruning encourages new growth which has a high demand for water.