GreenMech QuadChip Lightens The Load: Housing association Karbon Homes is responsible for the management and maintenance of almost 30,000 properties, making it one of the largest organisations of its kind in the North East and Yorkshire. As part of a business partnership with the Byker Community Trust (BCT), Karbon Homes provide BCT with a dedicated Grounds Maintenance Team, responsible for the upkeep of the Grade II* Listed Byker Estate. Helping Grounds Maintenance Officer Dan Thompson and his team of five with the woodland maintenance is a QuadChip 160 from GreenMech.

The summer sees the majority of the Byker team’s time taken up with grass cutting but in the winter the maintenance programme switches over to include leaf clearance, tree work and shrub maintenance. “As well as over 2,500 trees, there are lots of hedgerows and open spaces that all require upkeep” explains Dan, who has been with Karbon Homes for two and a half years. “As the estate was constructed in the 1970’s, it’s quite complex in nature with tight spaces in which to manoeuvre any equipment we purchase.” 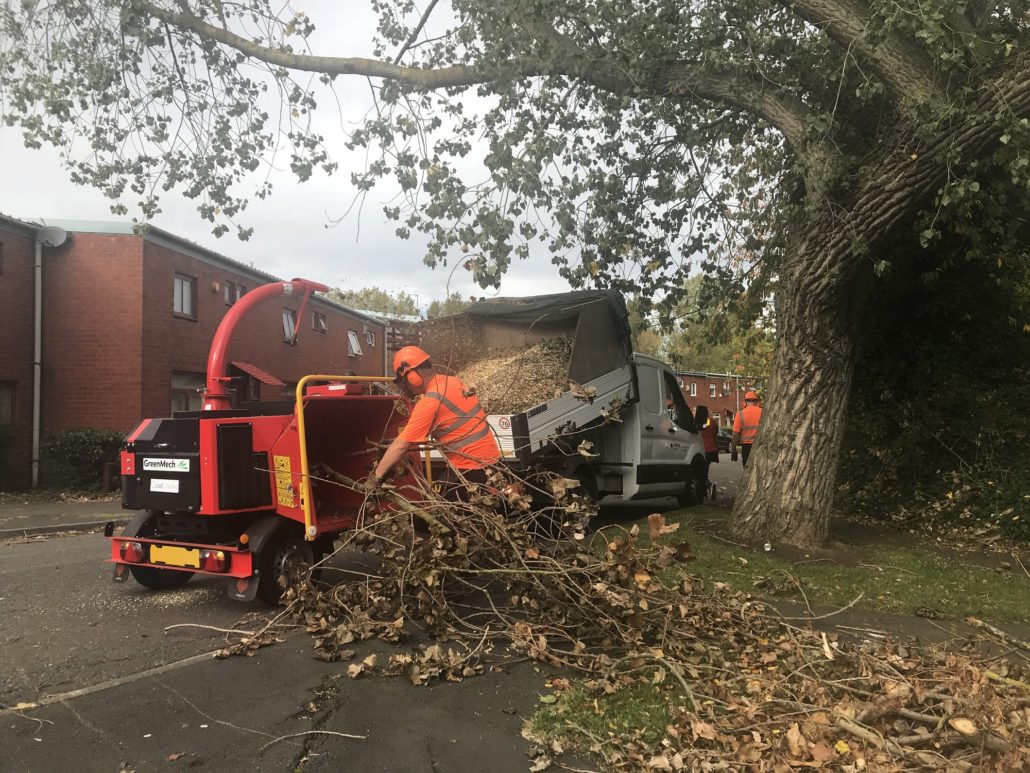 “My manager suggested we looked at the QuadChip because of its turntable, giving the operator discretion over the direction of the chip and improving manoeuvrability and safety. Peter Bagguley from GreenMech came in to do the demo and there were a number of factors that confirmed it was going to be the right machine for the estate. Firstly, and importantly, it’s under 750kg meaning all the guys can tow and operate it without an additional licence. The hopper is a generous size meaning it can handle larger timber than similar models, and it was also quieter than other chippers we’ve used which is great for working earlier in urban areas.” Following the successful demonstration, Dan took delivery of his GreenMech QuadChip 160 in March 2018, from their local dealer Lloyd Ltd.

Prior to its purchase, Dan and the team were borrowing a chipper from another Karbon Grounds Maintenance Team. “Having our own machine means it’s there and ready for any response jobs through the summer, and then in use daily for all of the winter maintenance. My team really have their work cut out and having the QuadChip has made the busy winter period that much easier.”