EcoBunker at unique ‘golf lounge’: One of the most unusual and innovative golf projects in the world is taking shape in Mexico City, and EcoBunker technology is playing a critical role.

Architect Agustin Piza was commissioned by his client, a leading Mexican executive, to build a golf practice facility in the grounds of the client’s under construction new house. “I think my client had a regular putting and chipping green in mind, but I don’t do regular things,” says Piza. 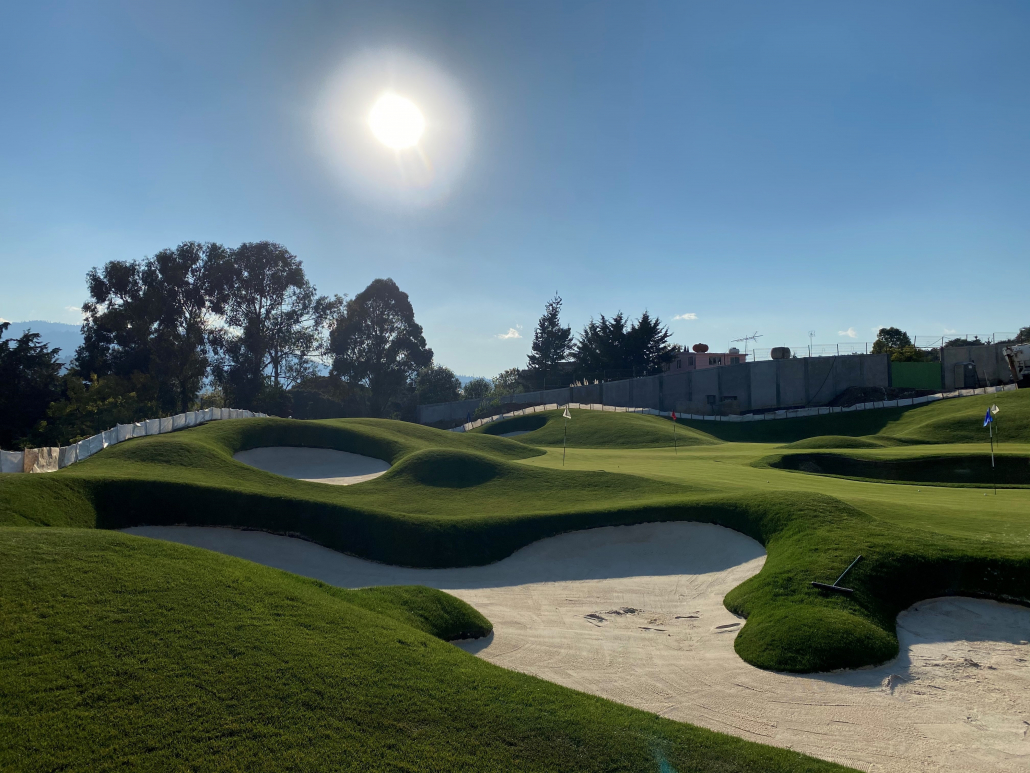 The architect conceived something he calls the ‘Golf Lounge’, a large, freeform putting green and surrounds that enables users to practice any golf shot they like from up to 70 yards. At the centre of the construction is a large revetted sand bunker, which is where the EcoBunker solution is deployed. And, in the heart of that bunker is to be found the centrepiece of the whole ‘Golf Lounge’ concept – a fire pit.

“The central bunker is key to the entire composition,” says Piza. “During the day you can practice all types of shots from 70 yards in. Flops, bump and runs, lag putts. Anything you want to create, it’s there. It is a multi-purpose area – during the day the family can enjoy either practicing golf or playing in the sandbox. In the evenings, you turn on the music, turn on the lights, turn on the firepit and relax. You can still putt around it, have a putting contest, whatever you like. I knew I needed the central sandpit to be revetted. I did my research and with the evidence available to me EcoBunker is the most proven system in the world for constructing revetted bunkers, especially in climates like Mexico City’s. I spoke to Richard Allen, the inventor of synthetic revetting, who I had met several times at EIGCA functions and said ‘Send me your best installer’. He sent me Llewelyn Matthews who did a fantastic job.”

Piza says that this job, because it is in a domestic environment, was rather different to most architectural projects. “The safe rule in architecture is that form follows function, but in this case I wanted the function to follow the form. This meant extra detail to creative and engineering work,” he explains. ”I wanted the client and his family to fall in love with it just by seeing it through the windows of their home, whether or not they were golfers. So I conceived it as a kind of ‘grass sculpture’ that would be both beautiful to look at and functional. If it is just a golf facility, it is a waste of space to anyone who doesn’t play golf. This way, it is something for the entire family to enjoy.”