Terrain deep penetration aeration for trees: We tend to take trees for granted, in our parks, estates and gardens, as a natural part of the landscape.

All too often they are subjected to stress as a result of a number of factors such as nutrient shortages in the soil, surface compaction due to foot traffic and waterlogging where water drains off hard surface pathways. Armed with a number of solutions, Terrain Aeration have been treating trees in all types of situation for over twenty-five years, from back gardens to large estates right through to Royal Parks. 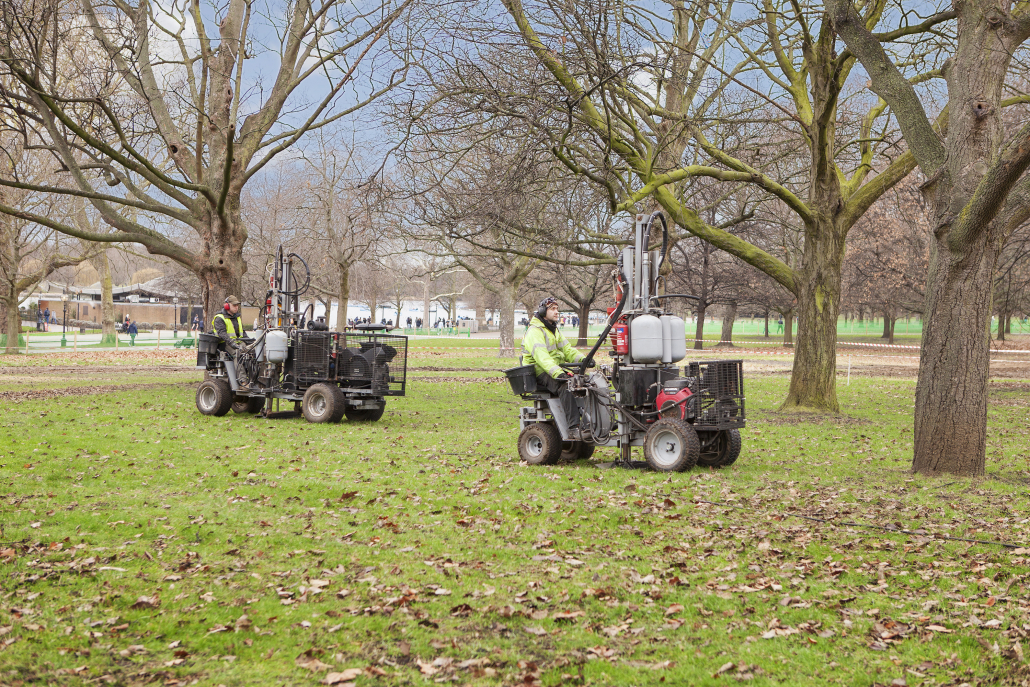 The Terrain Aeration Terralift machines comprise a probe which reaches one metre depth, deeper than the roots of trees (other than the major tap roots which grow straight down).  Breaking up the soil around the roots, and beyond, means that excess water will drain away from the roots to help stop anaerobic conditions and rotting of the root system.  The probe is then used to inject dried seaweed which helps keep the fissures open and backfilling the probe holes with aggregate provides a semi permanent aeration/ventilation shaft.  Terrain Aeration aerate around the roots using two-metre spacings – on most occasions one-metre inside and one-metre outside the canopy drip line, as this is where the growing roots lie.  Decompacting around the roots and injecting air into the soil increases the percentage of uptake of oxygen into the root system.

In one particular situation it was found there was a magnesium deficiency coupled with low overall soil fertility around trees in a park. This was determined using new technology to measure light transmission through the leaves on the trees to gain a reading of chlorophyll levels. The likely cause of the problem was that leaf litter is always removed and had been for a century, taking with it the natural nutrients from decaying leaves. There was also severe compaction of the surface around the tree. A tree feed mix containing slow release general nutrients and magnesium was injected, using the Terralift’s ability to inject granular material via its seaweed carrier, forcing it upwards into the root zone of the trees. This also avoids losing the nutrients to the grass which would occur with surface treatment. Two Terralift machines were used to carry out the process.

There are some products in the market place which advertise to be of help for trees with Phytophthora. There is a product which is applied around the tree roots via a watering can.  If the tree roots have been aerated by the Terralift machine, the product has a far better chance of reaching affected roots due to the soil being decompacted.  There are machines that will go shallower, but this does not have such an effective treatment as you would still need to get excess water away from laying stagnant around the roots. Terrain Aeration also recommend that root samples from good and affected trees, as well as tip samples be sent for full analysis from the Forestry Commission or any other Arboricultural advisor.  The samples should be labelled as well as being placed in separate plastic bags.  Photos of the location of the trees would also help, just in case there is a huge wall on three sides of the tree or something which could affect its well being. It’s best to give a complete “story” surrounding the tree. For more details on deep penetration aeration treatment for trees, sports pitches, golf courses and gardens: