TriCure AD™ & Terafirm™ combo come to the rescue: With the Jacobean-style mansion providing the backdrop to some of the courses 18 parkland holes, Warwickshire’s Welcombe Golf Club delivers undulations which are a challenge to player and greenkeeper alike.

In charge of the maintenance is Golf Course & Estates Manager Richard Sheldon who, with a rather aged fleet of equipment at his disposal, has turned to a combination of TriCure AD™ and Terafirm™ from Headland Amenity to tackle the issue of water management. 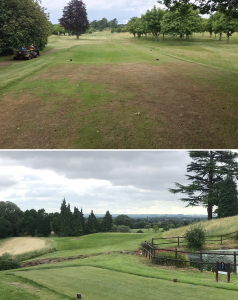 Richard’s first task when he joined the club in January 2020 was to assess his inherited fleet of machinery and spotted the notable absence of a deep aerator. “Our greens are constructed using rootzone and have the ability to drain well but due to the lack of deep aeration we were getting very shallow rooting caused by a pan layer, which also affected the distribution of moisture through the profile” explains Richard, who is assisted by a team of three. In addition, when Richard decided to fire up the club’s irrigation system during the first national lockdown, he found that around 90% of the tee sprinklers were broken! Thankfully, his knowledge and experience of Headland’s TriCure AD™ saved the day.

“It was a really hot period and we were seeing a loss of coverage on both the greens and the tees very quickly. We began using TriCure AD™ on the greens, which helped to retain any moisture near the surface, and in turn the roots, but this also penetrated through the pan layer and in just twelve months, the pan effect has gone. Our recent soil samples showed new deeper rooting through the profile. We also used TriCure AD™ on the tees and, alongside getting the sprinklers replaced, this undoubtedly saved the tees.”

TriCure AD™ multi-molecular soil surfactant improves soil surface dry-down and prevents hydrophobic conditions. Its three different active surfactant chemistries mean that it can treat all types of rootzone particles and can be applied at much lower rates (like for like) than competitor surfactants. “We are now applying TriCure AD™ on a monthly basis throughout the summer, on all greens, tees and approaches. In the winter we switch over to monthly applications of Terafirm™ advanced soil penetrant which has been really impressive.”

“Because we try and keep inputs to a minimum as part of our organic matter control, you can just begin to tell when the Terafirm™ is reaching the end of its field longevity and then, after spraying, the difference is quickly noticeable – the greens are firm, dry and free-from puddling. We had some lovely feedback from local Course Managers on the condition of our greens, even following the heavy rainfall we saw in January of this year.”

Richard concludes, “I used Headland products at my previous club and have always been impressed with the results. This is the first time I’ve been responsible for pricing up supplies and, having seen that the Headland products were competitive, we have converted our entire nutritional programme over to Headland over the last 15 months with fantastic results course-wide.”