The Warrington based club has 21 teams from the ages of three to under-17 level, with a vast majority of games played at The Hive. The development of the five-acre site on what was the former St Aelred’s Catholic School field, which over the years was left derelict took place four years ago with the help of funding from The Football Foundation, Corby Environmental and Sport England. 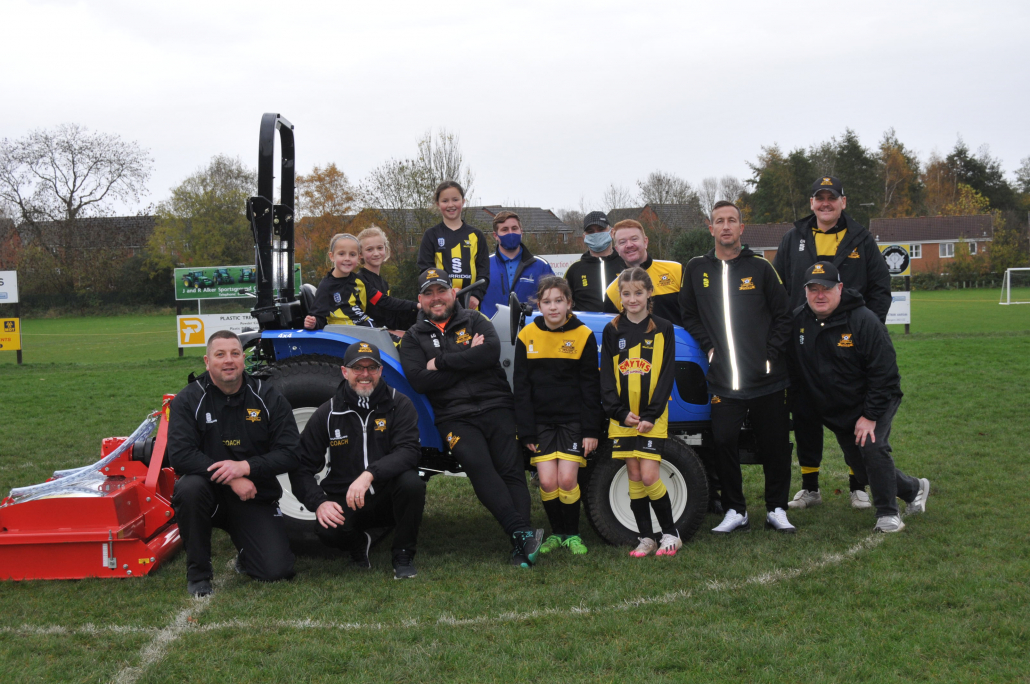 With that money and a 99-year lease from the council, the club renovated the ground, installed drainage, a modular building with toilets, a kitchen and a car park. To this point, The Hive has become one of the best football facilities in the area, and it is the aim of Chairman, Carl Hollingsworth, that this can be improved thanks to the help of Campey Product Specialist, Ethan Yates, and their new machinery.

“I’ve been with the club for nearly nine years now, mainly as a coach, but it’s only been in the last year and a half since becoming Chairman that I’ve seen a lot more happening behind the scenes than I ever had before,” Carl explains. “It’s been a bit of an eye-opener, with plenty of ups and downs, but thankfully we have a fantastic committee who put the Club first. Between myself, Dave Edwards our Secretary, and rest of the Committee we’ve steered the club through some pretty tough times with the COVID-19 lockdown and the premature ending of last season. Credit also must go to our players families who have supported us throughout.

“During this summer we applied for and received the Pitch Improvement Grant to help us do the maintenance on the fields, and the latest money is from that programme again, but on the equipment side of things and without them we’d be up the creek without a paddle basically, I can’t thank The Football Foundation enough.”

“Our old mower kept breaking down and about two months ago the wheel fell off so we had to source new bolts and a new a wheel head, but the bolts weren’t right, so it fell off again and it was sat in the middle of a field. That really prompted us to push even more for the new equipment.

“Once we realised we could get it, and raise the money we needed, Campey were brilliant in bringing a mower to demonstrate, and Ethan especially has been great. He’s been brilliant in taking my phone calls after work as we went through the process, and on the day, he dropped the machine off, he spent hours going through it with the coaches and me.

“It’s going to get more use because more coaches are willing to use it whereas the old one it was a bit of a no-go area for some of them because they were a bit intimidated by it. Whereas this is brand-new equipment, and they want to use it, which is good because it takes the pressure off me.”

The quality of The Hive has been recognised over the last two seasons with the award of the Warrington Junior Football League Presidents Cup and Alf Holt Cup finals, with the third round of finals also due to be played on the site unfortunately cancelled due to COVID-19.

Whether your club is striving to maintain or improve their pitch quality, Campey can assist you with advice on machinery and provide a full and comprehensive service of consultation and back-up to ensure you get the machinery you need to make a difference for your club.