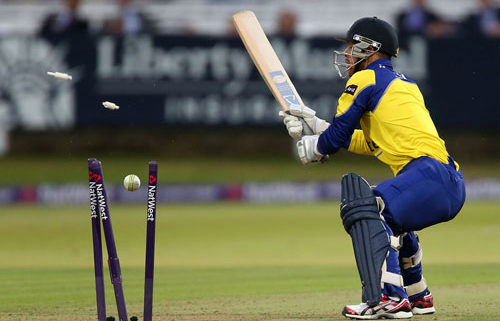 Keen to ensure the best-possible surfaces (for batsmen, anyway) for a competition seen as vital in attracting a new audience to the game, the ECB recently held a meeting with county groundsmen where the idea was discussed. ESPNcricinfo understands that Chris Wood, the ECB’s Pitch Consultant, has been charged with researching how to introduce such surfaces ahead of the launch of the competition in 2020.

There are significant pros and cons to the use of such pitches. While it would likely result in a certain homogenisation of conditions and provide even less opportunity for bowlers to extract anything from surfaces, it would also enable grounds to provide the centre-wicket pitches required by broadcasters multiple times without concerns about deterioration. Artificial surfaces might also be considered to provide uniformity of conditions for both teams, which a turf surface will not always offer.

Drop-in surfaces have also been considered but are not thought to be cost effective or provide quite the same uniformity of performance.

While long-term lovers of cricket may have reservations about artificial surfaces, the ECB’s mantra over the new competition is that it is not designed to appeal to those already watching the game: it is designed to appeal to the vast potential audience that is currently immune to its charms. The ECB feels that providing such good-paced surfaces will help create the high-scoring, boundary-filled cricket it believes will attract that new audience. It might also minimise delays after poor weather.

To that end, Wood is looking into the best options and cost implications of laying such pitches close to the middle of squares in all first-class grounds.

It is a move that will do nothing to address the increasing imbalance between bat and ball and might rob the game of the sort of low-scoring thrillers that made the 1983 World Cup final, the 2015 World Cup match between New Zealand and Australia and the 2003 World Cup match between Australia and England – among many others – so memorable. But subtlety appears to be one the likely victims of the T20 revolution.

Another successful MDP delivered at Warwick