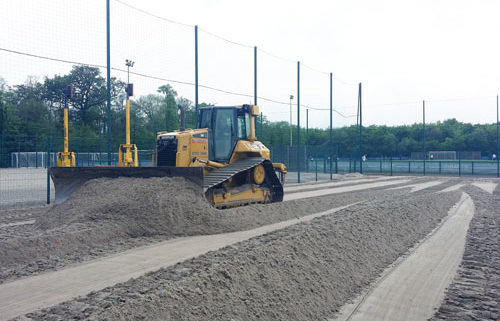 Two pitch reconstructions and one full renovation were completed at the training headquarters of the Ligue 1 champions, with all three completed in conjunction with Premier Pitches.

The past five years have been laden with success since the Qatar Sports Investments Group purchased the club in 2011. Whilst millions have been spent on football’s biggest names in the intervening three seasons, with three consecutive Ligue 1 titles and nine domestic cup competitions added to the trophy cabinet, the Parisian club have also invested off the pitch.

Head Grounds Manager, Jonathan Calderwood, has been with PSG since 2013 and has been a part of the club’s domination of French football as well as garnering plaudits for his Parc des Princes pitch during Euro 2016.

During this busy summer of international football that saw Portugal triumph and Jonathan’s native Northern Ireland make their return to a major tournament, MJ Abbott were undertaking two phases of work at Camp des Loges.

Jonathan explains: “It was essential that the new rootzone layer offered a smooth playing surface. MJ Abbott carried out a GPS survey of the pitches prior to work starting, from which they were able to design the new levels. When work started, the design was loaded into the bulldozer laser system, ensuring the pitch regrading and new rootzone was installed to very accurate tolerances from the outset.”

MJ Abbott Contracts Manager, Nathan George, comments: “As with all projects carried out for professional football clubs, time is very much in limited supply from the end of the playing season to the start of next season’s pre-season training. It was therefore imperative to deliver the project on time to ensure Jonathan had a suitable amount of time to grow the pitches in and get them ready for use when required by the club.”

Despite torrential rainfall encountered across Paris shortly after the pitches were completed, Jonathan and his team managed to get the pitches ready in time for the new season. “We struggled initially with wash out on the surfaces which meant we had to overseed once the rains subsided. MJ Abbott’s efficiency during the construction process certainly ensured that we had maximum timescales to get the pitches grown in.” Jonathan continues: “the new pitch surfaces have been well received by the players and look fantastic.”

MJ Abbott utilised Premier Pitches Ltd to carry out the cultivating and seeding operations on the newly constructed surfaces, and for the renovation of the academy Match pitch which formed the second phase of work. Nathan explains: “The two companies have utilised each others’ services on a number of projects to date. Premier Pitches’ expertise in end of season renovations is synonymous amongst some of Europe’s biggest football clubs.”

The Match Pitch end of season renovation involved removing the vegetation by Koro, vertidraining, rootzone topdressing application, cultivation and seeding. All work had to be completed within 5 days, to ensure Jonathan had the maximum amount of pitch establishment time. “Premier Pitches did a great renovation job on our match pitch, and as with MJ Abbott, their attention to detail and care for the end product was very impressive and gave me the confidence that the work was carried out to our specifications.”

The importance of using a reliable company on a project with such tight time-frames was very important for Jonathan, and the reason why MJ Abbott were selected by PSG to complete the work. ”Thanks to MJ Abbott and Premier Pitches and their professionalism, excellent quality of work and ability to complete all work on time, we had the maximum opportunity to have the pitches ready for the new season and excellent playing surfaces ‎for the up-coming seasons at the Paris Saint-Germain Academy.”

All Leading to Success
Scroll to top