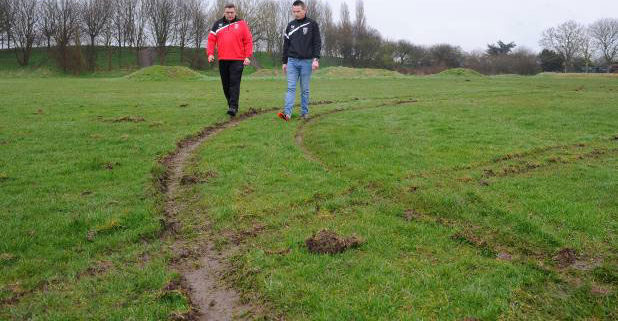 Young footballers have been prevented from playing crucial matches for their team after large sections of turf were found ripped up on pitches in Frome Road Park, near East Mount Recreational Centre, east Hull.

The tyre tracks first appeared in late February and Neil Coxon, 36, manager of Hull United’s under 13’s side, joined other club members to help repair the damaged pitches so vital matches could be played.

But he was left heartbroken early last week when he realised the pitches, which are also used by Longhill Ravens FC, had been vandalised once again.

The father-of-two, who lives in Portobello Street, east Hull, said: “I think it’s some idiot in a 4×4. The police can’t really do anything about it unless they catch them and it tends to happen in the middle of the night. No one sees anything during the day.

“The result of five minutes of so-called ‘fun’ has stopped 60 or so kids from playing football which is just ridiculous.

“I’ve been coaching for seven years from when my lad first started and it’s good for them. It gets them active and things like these keep them off the streets but if they can’t play it will turn them back on to the streets.”

Mr Coxon’s son Nathan plays for the under-13s team and the successful side are top of their league. However, their remaining home matches are at a serious risk of being postponed because it’s too dangerous to play on three of the 11 pitches.

Mr Coxon added: “From my lad’s point of view he had been playing since he was five and he’s now playing for the under 13’s. They are top of the league but their game is off because they can’t play on the pitch. He is gutted.

“We initially tried to smooth it over with a shovel and then put a layer of sand on it to try and make it playable. I am no groundsman – I’m a contract manager by trade but I’m trying to make it playable for these kids.Admittedly it’s no Wembley but we want to make it the best we can for them.

“In the summer there will be kids training on there most of the week. At the moment it’s unsafe for them. They could break their necks so from a safety point of view we just can’t let them train on there.”

Tony McCrainor, 46, is club treasurer for Hull United and his son, Bailey, also plays for the under-13s side. He believes quad bikes the size of cars are causing the damage.

Mr McCrainor said: “The kids look forward to their game on a weekend. It’s the be all and end all for a lot of them. They love training and when it comes to matchday on a Sunday it’s always disappointing if we have to call the game off.

“We’ve had trouble before with motorbikes and little mini kids bikes but you cant get round that. But these car-sized quad bikes have absolutely turfed the pitches up and they could twist their ankle playing on it.”

Hull City Countil’s culture and leisure department is aware of the vandalism and has taken steps to prevent further damage being caused.

A spokesperson said: “We have already taken steps to stop the damage caused to the fields by increasing security measures, including locking the main field gates each night.

“We are working with police to identify those who have caused criminal damage, and we would encourage anyone witnessing criminal activity to report it to the police.”

A Humberside police spokeswoman said: “The incidents happened during the hours of darkness over four nights from March 5 to March 8. This has caused substantial damage to the pitches and has now rendered them unusable until significant repair work can be carried out.

“The ground is used widely by the community and the effect it has had, and will have, is great. If anyone knows who has caused this damage please call us on the non-emergency number 101 quoting reference 2255082.”