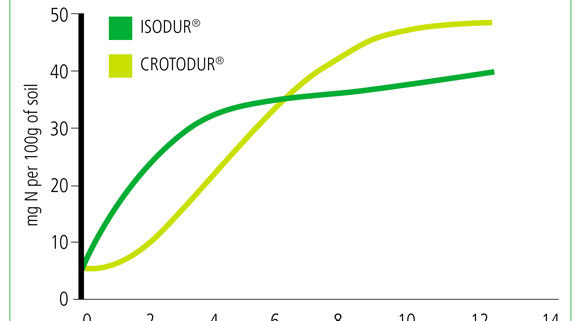 An all-new range of advanced granular fertilisers, which uses two slow release sources of nitrogen to provide a phased-release over a 16-week period from one application, has been launched by COMPO EXPERT.

The new Floranid®Twin range of phased-release fertilisers has been specifically designed for use on sports pitches, golf courses, tennis courts and all fine-turf sports facilities where a consistent and long-acting supply of nutrients is required.

“Just like the previous Floranid® range, Floranid Twin fertilisers contain a proportion of fast-acting nitrogen in ammonium and nitrate forms, as well as a phased-release element based on the advanced isobutylidene diurea (IBDU) or ‘Isodur®’ molecule,” explains Richard Brown of Germinal – COMPO EXPERT’s UK distributor. “In addition, the new range also contains a second, brand new, phased-release element in the form of crotonylidene urea or ‘Crotodur®’.”

The inclusion of Crotodur raises the Activity Index of Floranid Twin fertilisers from approximately 95% to over 98%.

“By comparison, the slow release fraction in conventional methylene urea (MU) fertilisers only contains around 40-60% of ‘true’ slow release N at best, whilst many contain less than half. Put simply, that means the remaining nitrogen is either quick release, and therefore no more value than standard fertiliser, or so insoluble that it may take years to be released,” Mr Brown continues.

“In contrast, Isodur and Crotodur fertilisers have an Activity Index or efficiency rating of 98-99%, meaning that almost all of the slow release N supplied will be slowly and steadily released into a form which can be taken up by the sward for a period of around 16 weeks.”

The two phased-release components contained within Floranid Twin products complement each other by ensuring nitrogen is only released when required by the growing grass sward: “Crucially, Isodur is released by simple hydrolysis, that is the presence of moisture, and temperatures above 4oC and is not reliant on biological activity to release the N,” Mr Brown explains. “This prevents leaching and makes it the perfect N source for sandy rootzones or cool autumn and spring conditions when biological activity is significantly reduced.

“Crotodur on the other hand begins to mineralise its N content in a second step when conditions are warmer and microbial activity has initiated, meaning that it will not be released until soils and soil life begin to warm up.”

This unique formulation not only extends the nitrogen release profile from three to four months, but, with the lowest salt index of all turf fertiliser products, also ensures there is zero risk of scorching and zero risk of leaching, thereby making Floranid Twin fertilisers the environmentally responsible choice.

“The result is a more even growth pattern, with none of the intense bursts of growth associated with basic fertilisers or inferior slow release products,” Mr Brown continues. “Floranid Twin fertilisers are therefore perfect for early season applications and can be applied less frequently, thereby saving vital man hours and other associated costs.”

How a Groundsman Became Footballs Most Notorious Mascot
Scroll to top