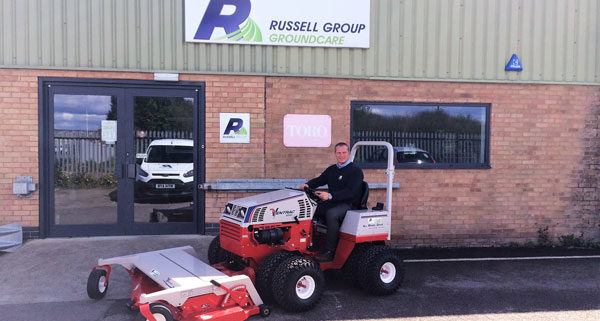 Price Turfcare, the Ventrac importer for the UK and Ireland, has appointed the Russell Group’s Groundcare Divison as their dealer for Yorkshire, Derbyshire, Nottinghamshire and north Lincolnshire.

A family business, based in Malton and one of the largest New Holland dealers in the UK, they have been serving the farming community since 1921, from five branches in Yorkshire and one in Derbyshire. A new depot in Rotherham opens in May 2017.

Glen Sawyer, Area Manager for south Yorkshire, Derbyshire and Notts commented,
“I’ve known Rupert Price for many years and when I saw him at BTME in January with the Ventrac, I was intrigued. He knows the turfcare industry backwards, so to see his new venture raised my curiosity. I invited him up to Yorkshire and arranged a series of demonstrations with prospective clients, which also gave me the opportunity to see it, and its many attachments, in action.

“I’ve seen a lot of innovative machines in my career, but this is something else. Yes, it’s a great mower with a choice of cutting units that’s particularly good on slopes. But its real attribute is its versatility. With a range of attachments, it’s a multi-functional machine that suits local authorities and golf club alike. It can work year-round – spring preparation, summer mowing, autumn and winter for maintenance. Some of the slopes it tackled were mighty impressive; this machine is a game-changer. That’s why we’re delighted to become dealers for this product.”