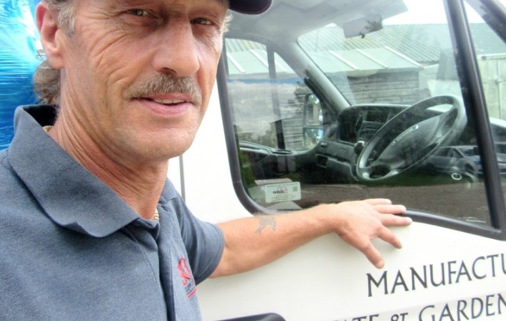 SCH Driver Vince Risks His Life In A Heroic Act: Seconds before the inferno that destroyed a Ferrari Scuderia in South Yorkshire last week, delivery driver Vince Cook helps the shaken and bloodied Ferrari driver out of the car. After witnessing the crash which has since made headlines throughout the world, Vince from Ipswich in Suffolk, jeopardised his own safety to drag the driver from the car.

‘I was on the inside lane of the M1, only doing about fifty or fifty-five miles per hour because of the heavy rain and surface water,’ explains Vince. ‘I saw the Ferrari coming up alongside in the outside lane, but he was only doing about sixty I think.’

Just as the Scuderia pulled ahead of Vince, things began to go badly wrong.

‘I’m not sure what happened – I don’t think the Ferrari driver is either – but the engine note changed as the car suddenly revved and swerved left, cutting in front of my Iveco truck. I knew it was going to be bad so I braked hard.

‘I could tell he was trying to gain control and I immediately hit the brakes, but the Ferrari was still revving like crazy as it hit a bank, took two trees down to stumps and launched into the field below.

‘I’ll be honest, I thought it was game over for him. The car was a wreck but then I could see movement and knew I had to get him out of there.’

Despite suffering a heart attack earlier this year, Vince clambered down the steep bank to do whatever he could to help.

‘The poor guy was covered in cuts and there was blood everywhere. He was conscious but obviously really shaken and so I put his arm around my neck and helped him get away from the car and sat him propped up against a fence. I then noticed flames under the rear wheels of the car, and knew we had to get right away from it. I dragged him to the top of the hill near where the car had flown off the carriageway just in time to see the thing explode.’

Vince found some bottles of water and kitchen towel in the cab of his truck, and set about cleaning up the shaken driver. ‘We could feel the heat of the blaze from where we sat. It was then that I asked how much fuel he thought was in the car and he told me it was full as he’d only just bought it!’

Vince waited with the driver until emergency services arrived, gave his statements and left to continue his work, delivering garden machinery for his employer SCH (Supplies) Ltd.

‘I still had quite a few drops to get done so off I went,’ says Vince. ‘I don’t think I did anything special. I’m sure anyone would have done the same it’s just that I saw it all and had to help. I didn’t really think anything of it at the time. I just saw someone that needed help, so I went and helped him. A little while after, I did start to think about what might have happened to him, and to me, if that explosion had taken place just a minute earlier. But I would never have forgiven myself if there had been a fatality and I hadn’t even tried to help.’