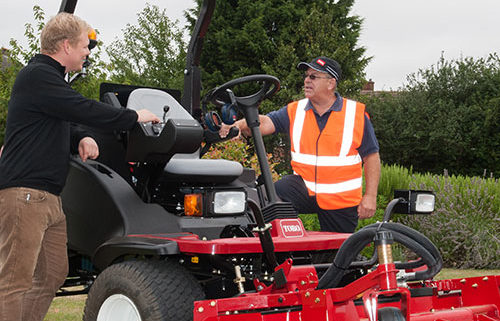 Only three years ago operations manager Kevin Matthews vowed to turn St Neots Town Council’s existing fleet of machinery Toro red, following the purchase of a CT2120, which impressed with its “superb” quality of cut. In August Kevin accomplished just that with the purchase of two durable Groundsmaster 3400 out-front rotary mowers.

The Council, whose grounds team of nine maintains a range of sites in Cambridgeshire, decided to invest in new machines when assigned more grounds to cover. Kevin says: “We needed something robust and the Toro GM3400 ticks all the boxes”.

Kevin was convinced it would be the machine for the job after attending an onsite demonstration at Reesink Turfcare: “Seeing the GM3400 up close and having Danny Lake [Toro distributor Reesink Turfcare rep] show what it can do made us realise just how brilliant it is. Reesink also managed to loan us a machine while our order was processed, which was an unexpected bonus!”

For Kevin, the main benefits of the machines include low running costs, reliability, ease of operation, ease of maintenance, and operator’s comfort. He says: “The machine is designed with the operator in mind, meaning my employees can be out all day and not suffer from fatigue.”

He goes on to say that with the GM3400s there’s “no need to worry about breakdowns because the reliability and build quality of these machines are second-to-none. Combine this with the back-up service from Reesink and you’ve got a world-leading formula.”

The GM3400s will primarily be used for Cambridgeshire County Council’s roadside verges, where Kevin believes the machines will enable him to do the job efficiently and keep the grass looking beautiful.

When speaking of the CT2120, the first ever piece of Toro kit purchased by St Neots in 2013, Kevin describes the durability and performance of the machine as “superb”. ”One of the reasons we chose this machine was because it’s light enough to be transported by trailer to different sites,” says Kevin.

This time round Kevin opted for the GM3400 because it’s as easy to operate as the CT2120, but it’s also a road-legal machine. He says: “The GM3400 came with a road-legal pack that includes lights and indicators, amongst other things. With this road pack the GM3400s are not far from being cars, and I can relax knowing my employees are safe.”

Before they owned Toro machinery, Kevin and his team were making do with competitor brand machines that weren’t right for the job and having to cut more frequently to compensate. Now, with a Toro fleet tailored to its needs, the Council has improved its cutting programme and reduced running costs too.

All of this has transformed the work lives of the grounds team at St Neots Town Council and, thanks to their reliability and performance, Kevin feels certain he will continue to invest in Toro machines exclusively.