Rink DS800 impresses in Arbroath: A Rink DS800 from Charterhouse Turf Machinery has dramatically improved the efficiency and results of topdressing the 18 greens at Arbroath Golf Links.

A task that used to take the team approximately 24 man-hours can now be completed by Head Greenkeeper Alistair Wylie in just six, since the club took delivery of the disc spreader in early summer 2019. 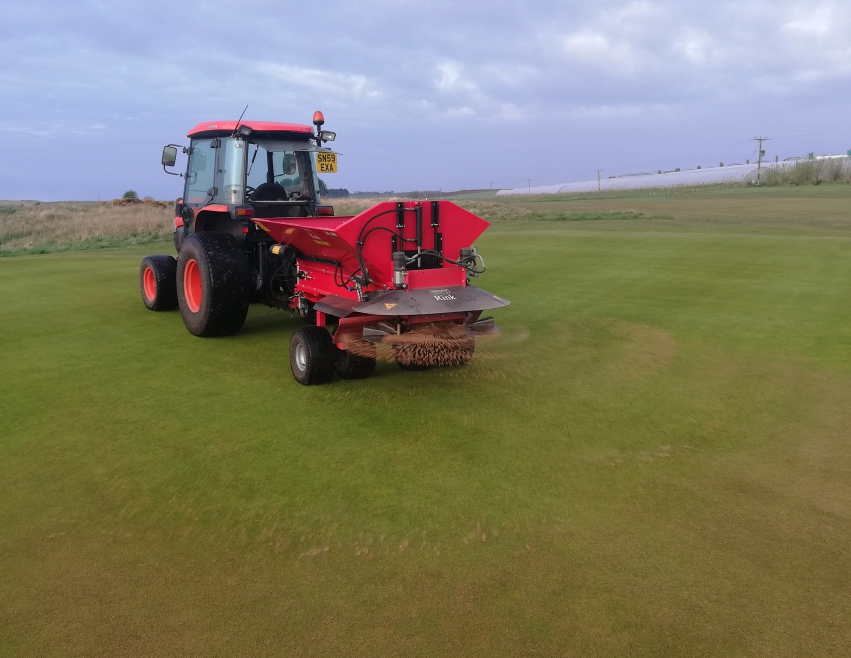 “We were previously using a drop dresser which had given us 20 years of loyal service, but an upgrade was needed to make the process of topdressing less labour intensive” explains Alistair, who heads up a team of three greens staff. “Dressing all 18 greens would take the team a whole day to complete so when it came to looking for a new machine, I was clear that we needed a disc spreader to cover wider areas, more evenly and in less time.” On dealer recommendation Alistair looked into the Rink DS800 trailed model and was confident, without even having a working demonstration, that it was the one for the job.

50 tonnes of sand was applied to the greens in two operations last year, the first shortly after delivery and another in October. “Any initial concerns we had about the DS800 moving and turning on its four wheels quickly faded away – it doesn’t mark the surface at all and because it’s so simple to adjust the spreading thickness, we can conduct light dressings and leave barely any trace that any work has taken place. It has certainly reduced complaints from the members which is another positive!”

With a 0.8m3 hopper capacity, the DS800 model offers variable spreading widths of between 2m and 12m, and at thicknesses of 0.5 to 15mm. Alistair adds, “It was evident from the very first green that we’d made the right choice – this used to take 27 passes to adequately cover with the drop dresser and with the Rink, it took us just three! The labour savings we’re achieving frees up the rest of my team to carry out other tasks which is crucial when you’re looking after a large course with a small team.”