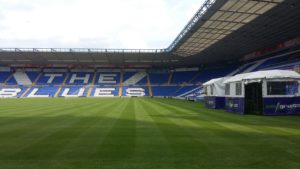 The Blues have installed a brand new SISGrass Hybrid surface similar to the recent installation at the Luzhniki Stadium in Russia where the 2018 FIFA World Cup Final will be played.

In fact 6 of the 12 Russian stadiums for the FIFA World Cup will boast the most technologically advanced hybrid system next summer.

Working on the project in association with Premier Pitches and MJ Abbott the laser guided stitching of the turf took place at St. Andrew’s this week in preparation for the new season under boss Harry Redknapp.

Martin Kelly, Head Groundsman at Birmingham City, commented; “We are really happy with the installation of the new SISGrass surface and can’t wait to get the season underway on it.

“As you would expect a lot of research went into the decision for a new playing surface and SISGrass was the clear winner – the service from start to finish has been superb.”

SIS Pitches UK Project Director, Phil Blackwell, added; “St. Andrew’s is an iconic stadium in the UK and we are proud to have installed SISGrass for the new Championship season.”

British company SIS Pitches installed the revolutionary SISGrass system having already completed pitches at AFC Bournemouth and Derby County as well as the Ta’Qali Stadium in Malta where England will play their next World Cup qualifier.

Andy Cole, Consultant at iTurf Management, added; “This is a significant investment into the pitch by the owners at Birmingham City and it will give them a stable and reliable surface for many many years to come.”