Cristiano Ronaldo furious with groundsman after being soaked by sprinkler during warm-up – Tensions were understandably high amongst the players ahead of the Champions League final between Real Madrid and Juventus. 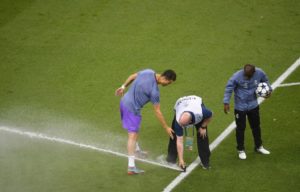 But they nearly boiled over when Cristiano Ronaldo and his team-mates were drenched by a pitch side sprinkler before kick-off. The Portuguese ace then gave the groundsman a glare before marching over to give him a piece of his mind.

Ronaldo was then seen trying to stop the sprinkler himself as Luka Modric and Toni Kroos were also given an early shower.