Three phase solution for Cruden Bay: After having completed the second of three phases of a complete irrigation installation and renovation, Cruden Bay Golf Club near Peterhead is now benefitting from cost and time effective irrigation from Toro.

Course manager Alister Matherson explains: “Splitting the work into phases meant we could spread out the cost and minimise the amount of time works were disturbing customers, plus it gave us time to make informed decisions about the irrigation system we wanted. 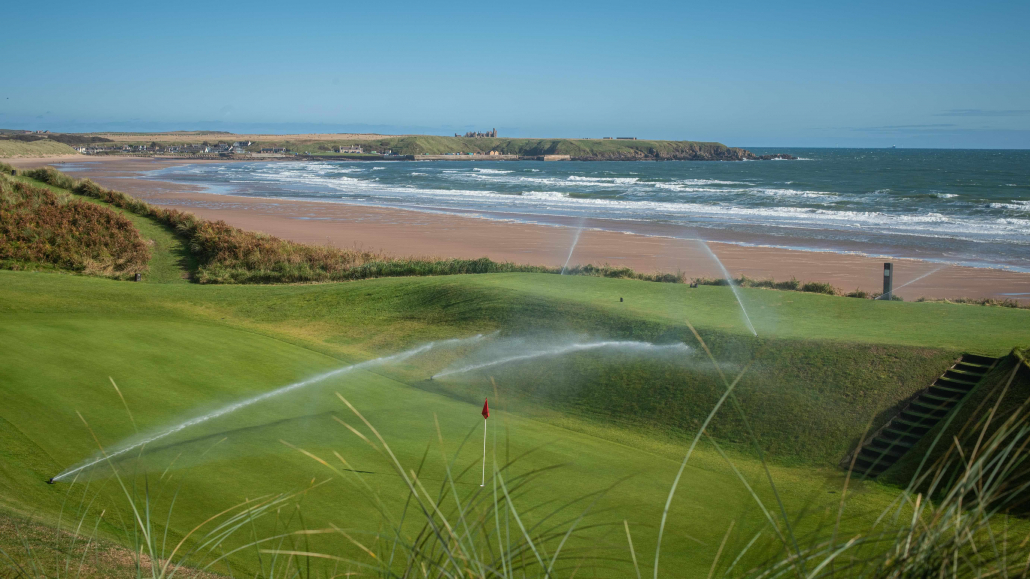 “We’re two thirds of the way through the installation and while it is a drawn out strategy it’s been worth the wait so far. We had the first phase of the irrigation installation in 2014. This involved installing a new transfer pump, holding tank and replacing the old pump set.”

And in 2019 came the cherry on the cake, with not only the addition of new pipework, cabling and Toro irrigation valves, but brand new Toro sprinklers across the greens, approaches and walkways, alongside Toro Lynx central control.

“We had a demonstration of Toro sprinklers and used them on the course alongside competitor brands. Throughout extensive trials, we saw quite clearly that Toro performed better,” says Alister. “The quality of performance of the heads and the quality of service from Reesink Turfcare was great.

“Added to that is Toro Lynx control, which is a great bit of kit. Easy to use software and very reliable, with features like the weather station which is fantastic. My favourite feature is probably the mobile app which allows us to control the irrigation from anywhere, which is superb!”

Despite the large installation and renovation, the process went smoothly with the work of OCMIS irrigation specialists and RH Associates consultancy. And since the second phase was completed, the course has certainly been seeing the benefits.

“Having a clearer plan for our irrigation means we can be more efficient and is the biggest plus,” says Alister. “The quality of coverage as well has made a big difference to the course.”

Renowned as one of the top golf courses in the world by Top 100 Golf Courses, Cruden Bay Golf Club’s traditional Scottish links course benefits from stunning views out over the sea and of Slain Castle. But it’s the unique topography and layout that makes it so popular, says Alister.

“With the course so well regarded, it’s important for us to make the course maintenance the best it can be. Having Toro irrigation means we can keep standards high and improve the course.”

Up next for the club is phase three in the irrigation installation, to cover the fairways. “We won’t change from Toro now that we’ve seen what their irrigation can do,” says Alister. “Although a few years off yet, we’re looking forward to slotting in that last piece of the jigsaw, which will give us a completely modern, functional system across the course.”

Toro A Cut Above At Cruden Bay: The performance of Toro’s Reelmaster 5410-D mowers on the fairways of Cruden Bay Golf Club, the traditional Scottish links course in Aberdeenshire, is preferred over all others.

Course manager, Alister Matheson, comments: “The first thing I noticed about the Reelmaster in the demo was the way it handled the ground. The course at Cruden Bay follows the original lie of the land to great effect and as a result the fairways have a few humps and hollows. This didn’t pose a problem to the RM5410, its quality of cut was by far the best. As a result, we decided to buy two.” 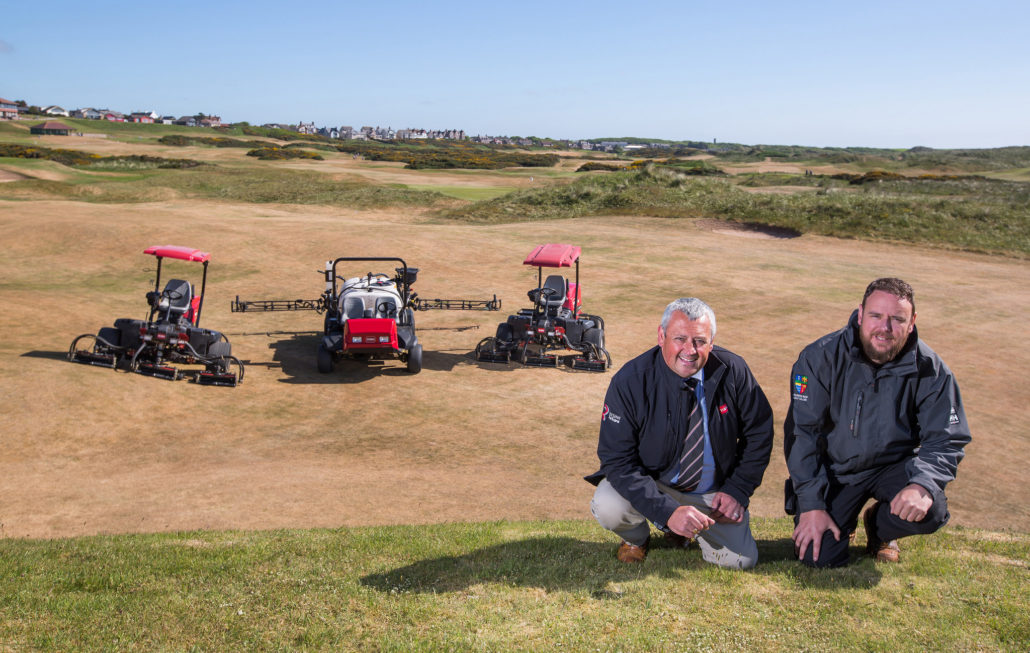 Alister and his team are proud to present their perfect example of firm and fast undulating natural links fairways, back after five years thanks to a particularly dry end to spring. As Toro’s UK distributor Reesink Turfcare’s David Raitt says: “The game originated here in Scotland and this is the way links courses should look at this time of the year. Many foreign golfers, especially Americans, love this set up for links golf because it represents how the sports should be played in the natural environment.”

The grass looks like this when the ground is dry and there is little moisture for the plant so it goes dormant. When enough rain comes, which it undoubtedly will, the grass will come out of dormancy and its familiar green colour will return.

Not that any of this has been a problem for the Reelmasters brought in for the fairways, as Alister confirms: “They can cope with all conditions.” The fact that the RM5410-D is designed with improved operator comfort in mind, did not go unnoticed by Alister either: “This machine is so much nicer to the driver,” he says. Alister’s right: tilt steering, a deluxe suspension seat, improved visibility and lower operating noise, all go a long way to enhancing the operator experience and helping to reduce fatigue.

Alister completed the order by selecting the Multi Pro 5800-D sprayer for the Championship course, which is ranked 24th in the country by the Top 100 Golf Courses, and primarily chose the machine for its increased tank capacity: “We had a tank capacity of 700 litres before, whereas the Multi Pro 5800-D can hold 1136 litres. This will be far more cost effective, and productive to use.” But it was in the demo that Alister realised just how “robust and reliable” the Multi Pro is too, and that sealed the deal.

Alister has a formidable CV with many of the golfing greats on it. Before his ten years at Cruden Bay, he spent five years at one of the best clubs in the world, Royal Dornoch, and before that was at the club that needs no introduction, The Wentworth. However, it could be said that Cruden Bay is the club delivering some of his biggest challenges, due, mainly, to the club’s location.

Alister explains: “Here at Cruden Bay we have true Scottish light and dark seasons. In the summer, we can have up to 21 hours of sunlight a day, in the winter, only seven hours. Plus, the growing season is much reduced here to just five months of the year. We have a sharp easterly wind to deal with and the usual challenges of being a sandy links course; we’ve been known to have sand dunes as high as three-story buildings! And all this against the backdrop of the North Sea.”

But with a team of nine full-timers and a machinery replacement programme which sees machines selected on their individual merit, it’s easily handled by the team and fleet.

So, what’s next for the top Scottish club? Alister is working towards a new Toro irrigation system for installation this winter on the greens, tees and approaches, which will ensure precise irrigation of the course even in its windy, exposed location. Until then, we leave Alister, the team and the club’s members enjoying improved fairways, thanks to Toro.