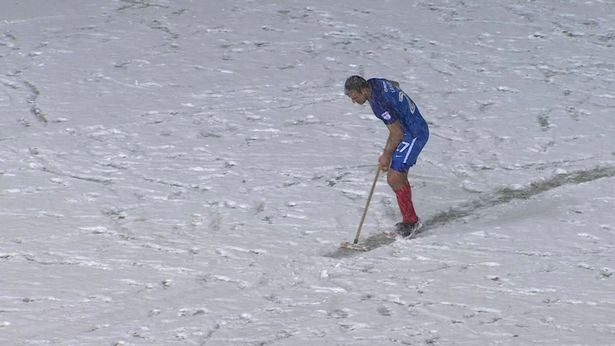 Posh Defender Turns Groundsman: Peterborough United defender Steven Taylor played an extended role in his team’s victory on Tuesday night, by helping to sweep snow off the lines at the ABAX Stadium.

Peterborough were hosting Walsall in a League One clash but heavy snow in the second half meant the pitch was hardly visible.

The Posh were 2-1 up in the 80th minute when the referee halted play to ensure snow could be cleared off the pitch.

And it was former England U21 captain and Newcastle centre-half Steven Taylor who was the hero of the hour.

Taylor was seen desperately shovelling snow to make the lines visable so play could continue.

“Steven Taylor is a hero,” one fan wrote on Twitter.

Another said: “Steven Taylor not only clears the backline he now helps clear the lines on the pitch.”

There was a seven minute break in play as the ground staff and home players brushed the snow on the pitch.

Peterborough eventually ran out 2-1 winners to earn their first victory in eight games.