DLF Deliver Colour At Lilley Brook: Scrub areas at Cheltenham’s Lilley Brook Golf Club have been rejuvenated thanks to wildflower mixtures from DLF Seeds. In a quest to improve the visual appearance and ecological qualities of waste land around the site, Course Manager Nigel Thompson has found success with DLF’s Colour Boost mix.

Situated on the edge of the Cotswolds, the picturesque 18-hole mature parkland course keeps Nigel and his team of 5 greenkeepers very busy. “I’ve been looking at ways of adding colour and diversity to areas around the course that don’t tend to get a lot of maintenance” explains Nigel. “We earmarked a scrub area between the 2nd and 3rd hole to trial a wildflower plot last year. Ian Barnett of DLF came in to explain the various options available, and we settled on an annuals mixture, Colour Boost 1, which we sowed last May.” 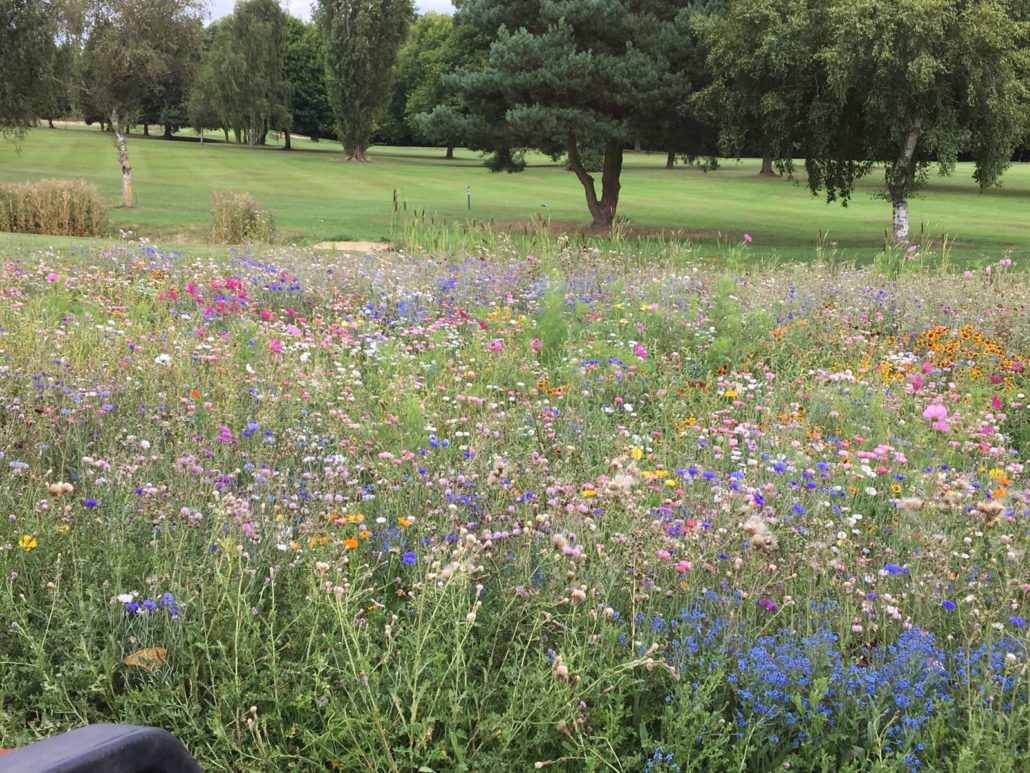 “Despite the warm and dry conditions, it popped up Mid-June and provided outstanding colour right through until the late autumn. Not only that, but it provided a habitat for insects to thrive in, in particular we noticed an increase in bees, in and around the wildflowers.” The Colour Boost mixtures incorporate both wild flower and garden flowering species, that establish rapidly to deliver a colourful display throughout the whole year. Sown directly onto the final recipient site, they require little irrigation, fertiliser/chemical application or maintenance throughout the season.

Following the success here, Nigel is now planning to introduce some more wildflowers, this time native perennials, around the perimeter of the course. “As part of our ongoing drive to introduce wildlife initiatives, we’re going to use the DLF Pro Flora 9 mixture around teeing-off areas to create habitats for a variety of species. It’s great to think we can do our bit to support pollinators, and at the same time, improve the look of the lesser-used areas of the course. It’s a win-win!”

GreenMech Chippers Deliver Reliability: A fleet of GreenMech woodchippers have been fundamental in the successful delivery of large-scale utility arb contracts for South Wales Arborists. Running both tracked and road tow models, Director Stuart Michael and his arb teams are well-equipped to deal with all tree, shrub and woodland projects which ensure the safe management of the power networks.

As approved contractors for Western Power Distribution (WPD), SWA have over 10 years of experience in managing trees in close proximity to overhead lines, both low and high voltage. “Our chippers are the key tools in helping us to deliver the contracts, and the vast array of sites we attend mean we’re often working on a variety of different terrains” explains Stuart. “We’ve used a few different makes of woodchipper over the years but have had various reliability issues and found parts to be expensive so when we made the decision to look around, I got in touch with Julian Cullis of GreenMech.” 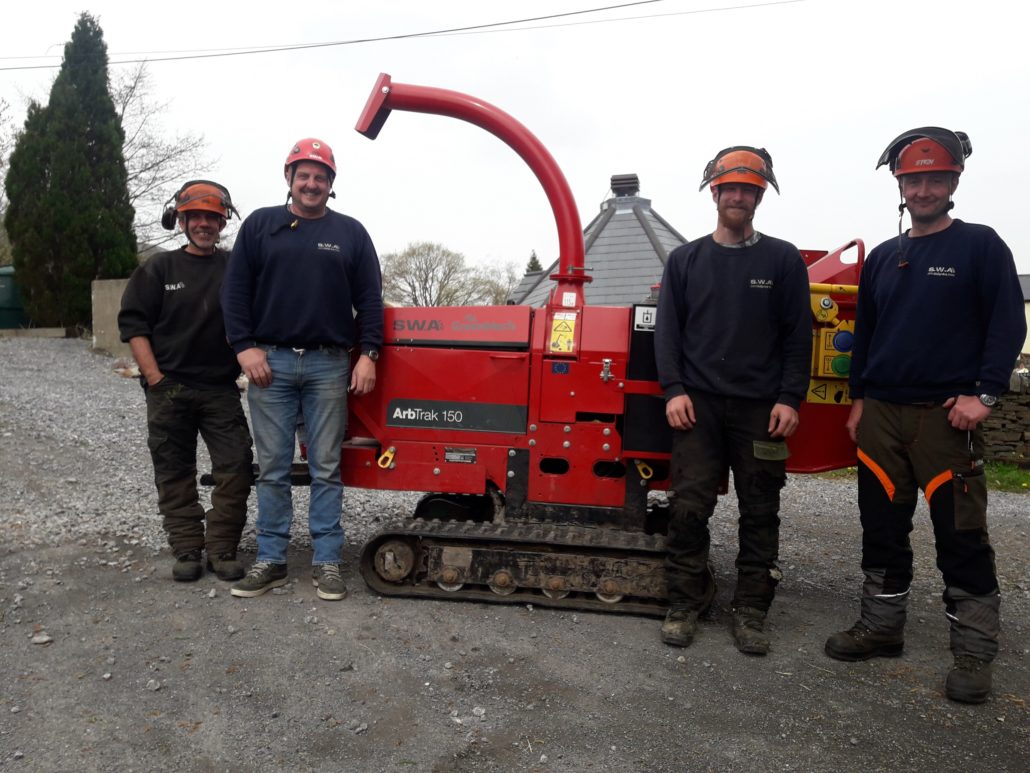 “We were immediately impressed with what the GreenMech machines offered and bought our first tracked machine from them roughly 8 years ago.” SWA now have a 9” ChipMaster 220 TMP for large, high-volume projects, two Arborist 150 road-tow machines used predominately on low-voltage street works and, the most recent additions to their fleet, two ArbTrak 150’s for off-road projects and those on challenging ground conditions. Stuart also specified his machines in red livery, the company’s corporate colours.

“These chippers have been brilliant, they’re efficient and chip a range of materials thoroughly and accurately. Though 99% of our workload is utility arb, we have the range of machines now to easily reach a variety of locations and handle material no matter the size.” Stuart is hoping to have fully converted his fleet over to GreenMech machines by the end of this year. “Since the introduction of the first GreenMech chipper all those years ago we’ve never really looked back. We get fantastic support from Julian and look forward to continuing to deliver our contracts, with the help of GreenMech, for many years to come.”

Headland Deliver Strong Fairways At Abridge GC: In what was a challenging year for Greenkeepers up and down and the country, Course Manager at Abridge Golf Club Geoff Smith had no complaints with the way the course emerged from the prolonged period of hot weather. The fairways, in particular, came out looking better than ever, which he puts down to the timely installation of a new Perrot irrigation system, and his tried and tested nutritional programme from Headland Amenity.

Geoff joined Abridge, a Regional Open Qualifier 2009-2013, as an assistant greenkeeper 17 years ago, on the back of learning his trade at The London Golf Club. “When I took charge 12 years ago in the autumn of 2006, I found out within my first 3 months at the helm that we were going to be hosting a large national tournament in the summer of 2007, which was a daunting challenge to say the least! I decided to call on the expertise of some trusted industry contacts – one of whom was Claire Harley of Headland Amenity.” 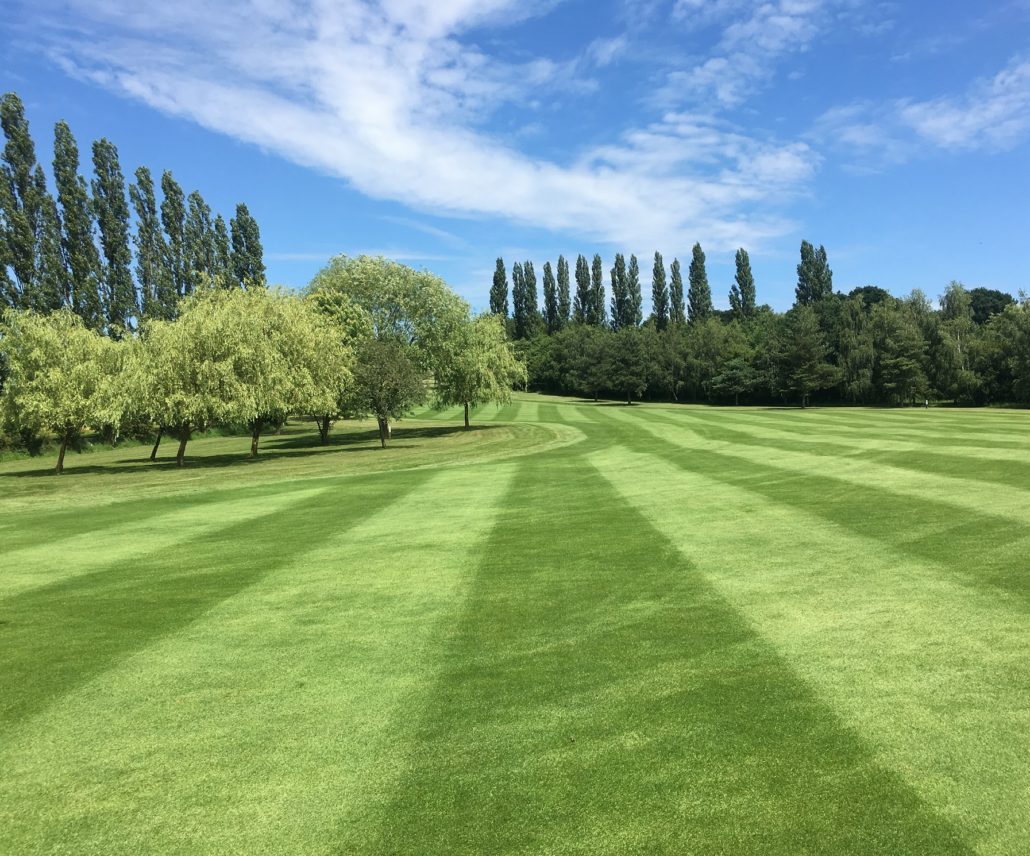 “All those years ago she recommended we apply Multigreen® 28-3-15 temperature-controlled release fertiliser on the fairways, a programme we still follow to this day.” Multigreen® is the only long-term fertiliser where nutrient release is governed by soil temperature only and not affected by other factors such as moisture, pH or microbial activity. Ideal for use on fairways, coarse turf or winter sports pitches, the prills contain their nutrients within a permeable resin-coating to prevent severe leaching loss.

“Abridge can be a bit of a grass factory but with the controlled release of Multigreen®, we get a consistent, healthy growth on the fairways that continues for months. Last year was a great test for our nutritional programme and we’ve emerged with flying colours!” Geoff applies Multigreen® once a year, and compliments this with a tank mix of TriCure and Elevate Fe, applied in September/October, to help in the management of Dollar Spot – another recommendation from Claire.

Geoff adds, “I have a great working relationship with Claire and know she’s always on the end of the phone if I need help or guidance. Undeniably, the Multigreen® feeds, together with a verti-drain and scarification programme, has helped me to produce fairways that our visitors and members describe as carpets! They love to play on them and that’s really what counts.”