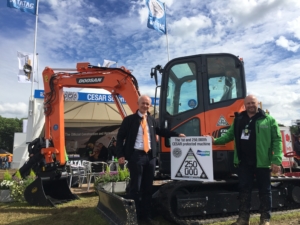 At the recent Plantworx 2017 Exhibition, a new Doosan DX85R-3 mini-excavator was unveiled as the 250,000th CESAR marked machine in the UK.  The official CESAR Scheme is owned by the UK’s Construction Equipment Association (CEA), the organisers of the Plantworx event, and is the number one anti-theft and recovery system for plant and agricultural equipment.  CESAR was launched in 2007 to help combat the theft of equipment which was estimated to be costing the industry £1 million a week at the time.

Attending the unveiling at Plantworx on behalf of Doosan was Kim Dudley, Regional Manager – Northern Europe, who was presented with a certificate marking the occasion by Kevin Howells, the CEO/MD of Datatag ID Ltd, based in Egham in Surrey, the chosen delivery partner for the official CESAR Scheme.

The ceremony marked the tenth anniversary of Doosan’s participation in the scheme, which began in September 2007, when the company became the first construction equipment manufacturer to fit CESAR to all the company’s products.  The official CESAR security marking scheme was itself launched earlier that year and, as well as celebrating 10 years of CESAR, Datatag is also marking 25 years in the security marking business in 2017.

Kim Dudley said: “Since we joined the scheme in 2007, every Doosan machine sold in the UK has been CESAR marked, providing a powerful deterrent to thieves and peace of mind for our customers.  It has brought our dealers and their customers many benefits as it allows the police to quickly establish the ownership of construction equipment recovered after theft and to quickly return it to the owner.

“This ensures that police will more readily pursue stolen plant (knowing it can be identified) and lowers the insurance premiums our customers have to pay for their machinery.  Since Doosan joined the CESAR Scheme in 2007, many other leading manufacturers have also adopted the scheme.”

Kevin Howells, CEO/MD of Datatag, said: “Reaching 250,000 machines protected is a significant milestone in the story of the CESAR Scheme and we couldn’t be happier that just as the very first machine protected was a Doosan product, the 250,000th is also a Doosan machine.  Doosan has supported the CESAR Scheme since it was launched, recognising the theft deterrent it provides to the company’s customers.”

Made up of state-of-the-art Datatag security marking technology which includes tamper evident warning labels, forensic DNA, Datadots and RFID tags, CESAR permanently marks and protects machinery, making it identifiable to the police in such a way that it is virtually impossible for a thief to defeat.

As a result, the risk involved in stealing a marked machine becomes high to the criminals who tend to avoid stealing it in the first place, with CESAR contributing to a 70% reduction in thefts.

Kim Dudley added: “New Doosan machines weighing 14 tonne and above offer another level of protection through the Geofencing available through our standard on-board DoosanConnect telematics system.  Whilst thieves have succeeded in producing jamming devices that can temporarily block telematics and tracking systems, they have not been able to overcome the protection provided by CESAR marking, which makes it another very attractive feature of the Doosan range.”