Created by developer Michael Weichselgartner with the aim of hosting major tournaments and the Ryder Cup, Golf Valley was built in a links-style, with over 3,000 sq m (32,000 sq ft) of bunker sand area and, according to Andy Matzner, the club’s first course manager, who now works there in a consulting capacity, has always struggled with the impact of rain on its bunker faces. 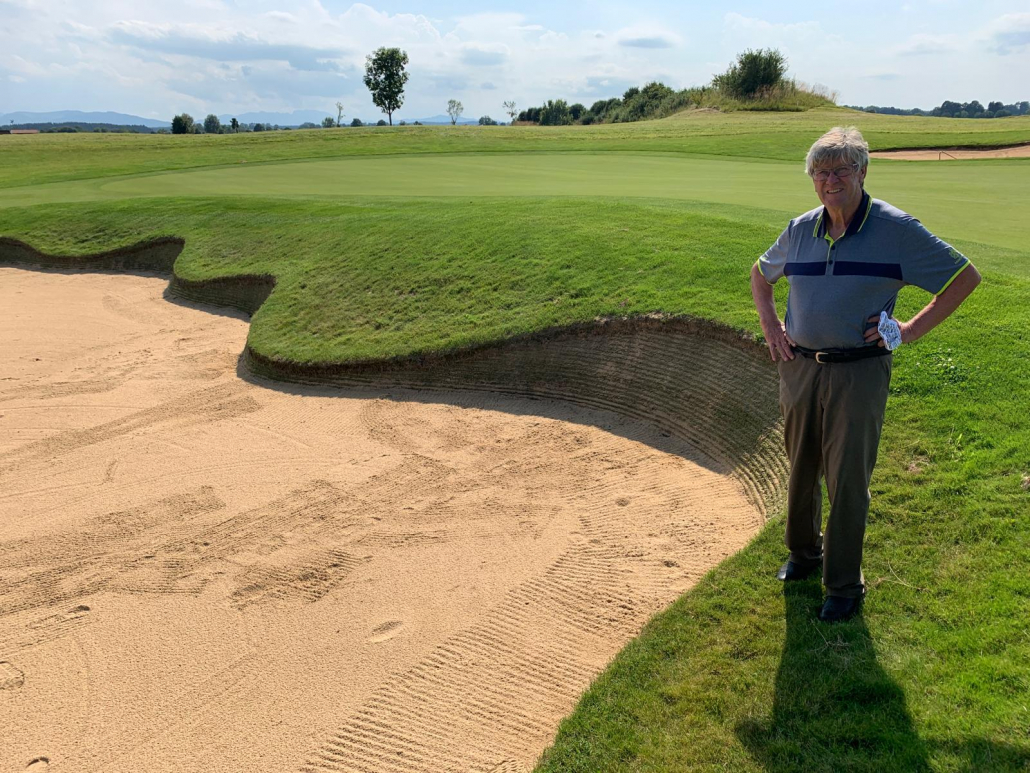 “With such a massive area of sand, it was always a huge workload every time there was serious rain,” says Matzner. “In Bavaria, in the early summer, there are regular lightning storms, and every time there was a rain event, the whole greenkeeping crew would be occupied pushing sand back up the faces. And then the next day, it would happen again! I had real difficulty motivating my staff to keep shifting sand, and obviously the impact on our maintenance costs was huge.”

Matzner, by then consulting at Golf Valley, met Richard Allen, founder of synthetic bunker edging solution provider EcoBunker, in 2017. “By that time, I had realised that the bad weather, and the consequent washouts, were just something we had to deal with,” he says. “Golf Valley has no trees, and the course is quite links-like in look and feel, and it occurred to me that revetted walls, sensitively installed, would fit in nicely, and would give the place a more authentic links character. Richard visited and assessed the bunkers, and agreed with me that revetting would improve both their appearance and their performance, so we commissioned EcoBunker to install its product on an initial 200 sq m of bunkerfaces.”

That project, in spring 2018, was handled by EcoBunker construction manager Llewelyn Matthews. Covering thirteen bunkers, Matzner and the Golf Valley team were impressed by the results. “A revetted wall in sunlight and shadow looks very impressive,” he says. “But the most important thing was the prevention of washouts. A flat sandy bunker never washes out. It may fill up but so long as the drain operates effectively, the bunker will always work.”

In late 2019, Golf Valley was hit by a huge rain event. Almost every bunker, apart from the ones that had been rebuilt by EcoBunker, was virtually destroyed. The EcoBunkers survived the storm completely intact. At this point, owner Weichselgartner decided that as many as possible of the course’s bunkers should be rebuilt using the EcoBunker solution. The EcoBunker team came back on site in October 2020 to build the next set of bunkers. That project was substantially completed in December, and Matzner says the results are impressive. “The course looks much more like a real links now, and the bunkers perform far better,” he explains. “And that is all down to EcoBunker.”

One such club is Mill Green Golf Club in Hertfordshire, where Course Manager Andy Copeland has successfully trialled PPT114 as part of his EPH tank-mix and has reported significantly reduced levels of disease activity. 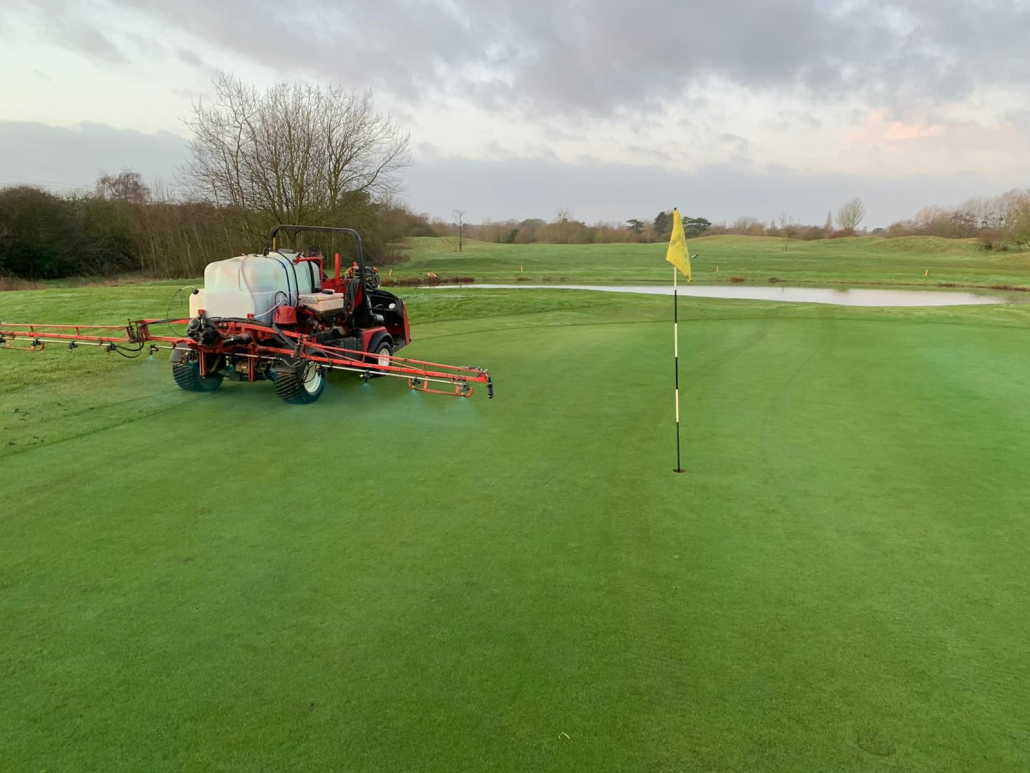 Andy joined Mill Green in July 2019 but has been using Headland Amenity products for much longer. “When I first took charge of a club 10 years ago, I very much sought the guidance and advice of those trusted suppliers around me – one of those being Headland. Some of those products that were incorporated into my programmes back then, still play a major part of my regime now here at Mill Green – including C-Complex and the 20/20/30 tank-mix. We’re not in a position where we can afford to take too many risks, so when you find products that give you guaranteed results, I tend to stick with them.”

Saying that, when new products or adaptations to mixes become available, the trust that Andy has in the advice of his Regional Headland Technical Manager Peter Blackaby means he’s up for giving them a try. “When Mantle was introduced and incorporated with the 20/20/30 mix we trialled that and noticed the improvements straight away. Following discussions with Pete at BTME, for the remainder of the winter we’ve now doubled the Mantle application rate with great results. He also showed me the trial results of the PPT114 formulation back in October, and I was confident that it would work well for us.”

PPT114 is a soluble, micronutrient formulation featuring Manganese, Zinc and Copper, alongside Harpin Protein Elicitor. It has been developed to increase the efficacy of plant-health applications, helping to minimise Microdochium nivale infection. Andy combined PPT114 with his monthly fungicide strategy, followed up with 20/20/30+Mantle mix two weeks later. “We first trialled it on our Par 3 on its own and it was evident just seven days after the first application that the greens looked good and clean, so we rolled it out course-wide. This proactive strategy gives me better control over the health of our greens and, compared to other sites, the results we’re achieving, and the reduction in levels of disease we’re seeing, are much better.”

The RotoBlast adds to this impressive line of machines with a 3,750-rpm blower that produces an air velocity of 130m3/ min. 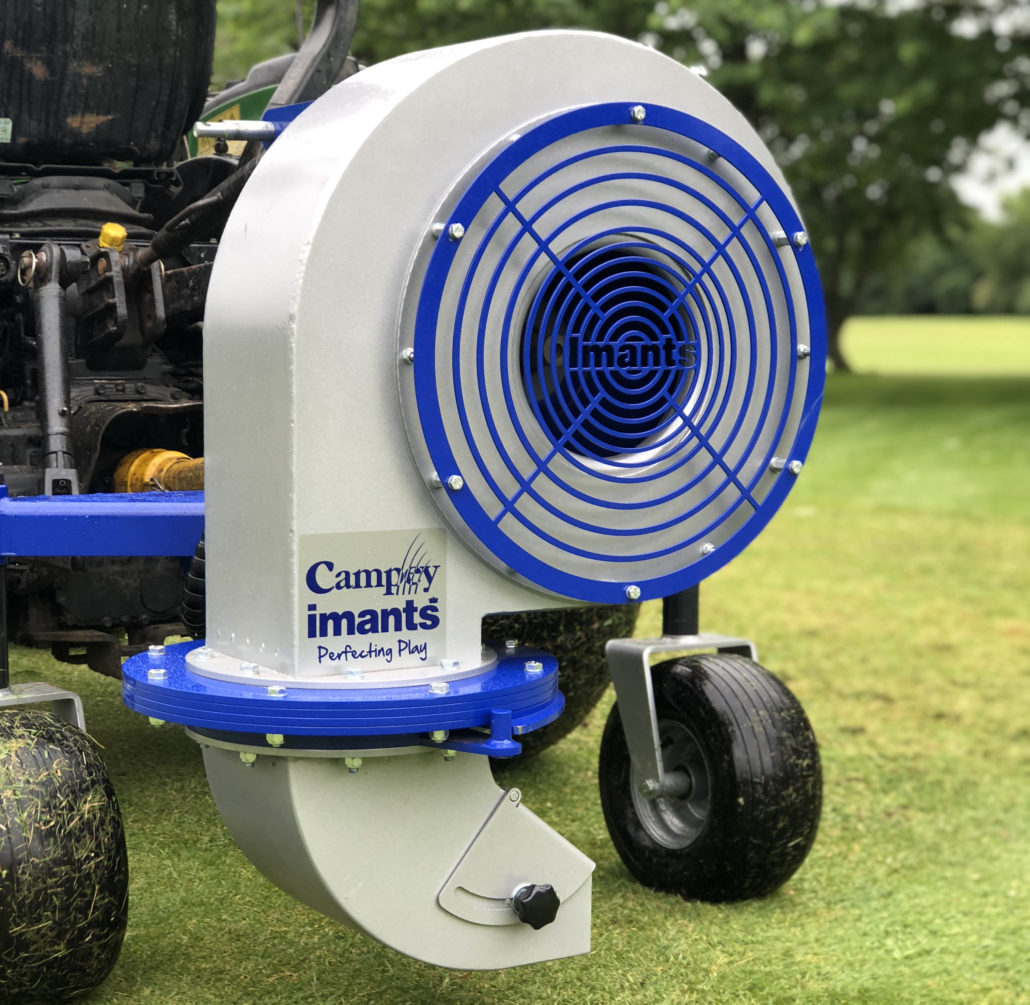 The tractor mounted blower is typically used for clearing greens and tees, fairways, pathways and other sports turf areas, but it is also designed to move leaves, grass clippings, thatch, litter and other unwanted surface debris from any area that requires clear access or to be kept tidy.

As with all Imants machines, the RotoBlast has been designed with the practical user experience at the forefront. Attached by a 3-point linkage, the powerful blower is mounted on a wheeled chassis to enhance its ability to follow contours on undulating terrain whilst maintaining a constant nozzle height above the ground. There is also an option to invert the wheels and revert to a fully mounted operation.

The lightweight machine only weighs 100kg and can be lifted and moved by one person when not mounted on the tractor. It has a capacity of 300m2/min with an operating speed of 0.6 -6.2mph, requiring only 25 -50 hp tractor power.

INFINICUT Enhances Plant Health: While mowing appears simple in its application, it can have either positive or negative consequences for plant health depending on mower performance. Attainment of correct cutting performance on sports pitches will include, but isn’t limited to, sharpness of cut; attitude angle and behind centre distance (BCD) of the bedknife; frequency of clip and weight distribution. MTD Specialty Turf Products explores the importance of mowing on plant health and how quality of cut has been paramount to operations at Watford FC, seeing them crowned the Premier League Grounds Team of the Year for 2017/18.

Beginning with sharpness of cut – dull or poorly sharpened mowers tear and shred grass blades rather than cut them cleanly, increasing the plants vulnerability to disease. A dull cut can be caused by a mower that does not maintain cut quality for an acceptable length of time.  This may be down to either a poorly designed bedknife-reel adjustment mechanism; an imbalanced reel causing premature wear; or a poorly designed cutting unit that “oscillates” during rotation. 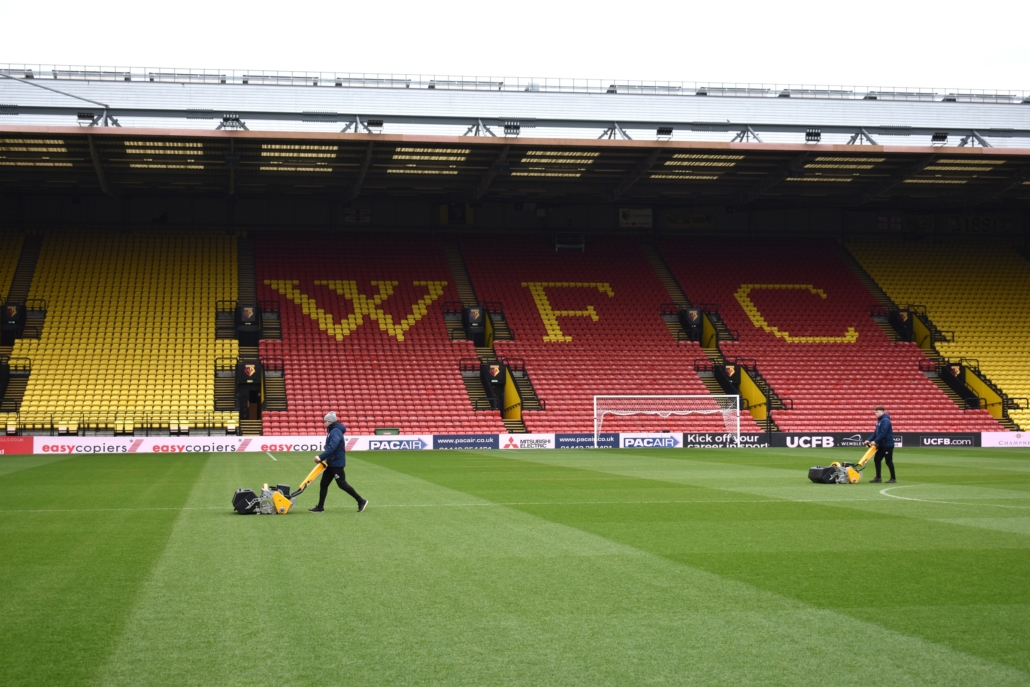 Attitude angle and behind centre distance (BCD) are interlinked and an improper set-up of these features will not only impact on after-cut appearance but can negatively affect plant health.  The greater the BCD, the more aggressive the cut because the grass blade will be “dragged” prior to it being trapped between the bedknife and reel.  An aggressive cut also means a shorter cut as the leaf blade is lifted “up and back” prior to shearing. For a less aggressive cut, the bedknife is positioned much closer to the reel.

Frequency of clip (FOC) is the distance between mower shear points, determined by the number of reel blades, rotational speed and the mowers forward speed.  FOC is important in ensuring the correct quality is achieved for the specific height of cut. One should also consider the leaf’s moisture content – a high clip rate on a less rigid leaf can cause mulching.  The ability to alter FOC is thus advantageous.

The Cub Cadet INFINICUT® has been specifically designed to handle the numerous variables that modern day sports venues encounter.  Its ingenuous ability to alter geometry and working parameters ensures sward consistency is attained regardless of the time of year or conditions encountered.  Plant health can only be augmented by choosing the correct equipment set-up for the circumstances that prevail at any given time.

Scott Tingley, Head Groundsman at Watford Football Club said, “The INFINICUT® has become a vital part of our maintenance programme. We have two machines which are used primarily for match preparation, however we have used them more regularly this season due to the added benefits we found during the week. The quality of cut has led to a better visual appearance, but more importantly a healthy grass plant that has suffered less from disease. There’s also the added benefit of the health and safety elements – my staff regularly comment on how much lighter, quieter and more comfortable they are to use than alternative machines.”