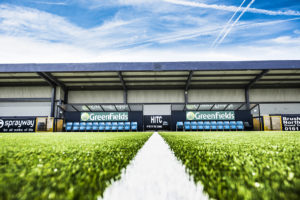 The deal, initially for the 2017/18 football season, was announced at a meeting of the league’s 68 clubs, with an introductory presentation from GreenFields.

GreenFields will provide NPL clubs with surface solutions to meet the growing demand for 3G and hybrid turf pitches, as well as advice on maintaining grass surfaces. As a result, the league hopes to reduce the number of fixture postponements, especially during the winter months.

NPL club Hyde United have already been working with GreenFields for a year having laid a 3G woven pitch. The club is delighted with their choice of surface as Pete Ainger, General Manager, explains. “The feedback has been excellent. Players and officials alike have commented that it is amongst the best surfaces they have experienced. The technology is massively different from other 3Gs, it performs like a grass pitch with increased durability. The woven technology enables the grass to stay upright and it’s an obvious difference to standard 3G pitches.”

Mark Harris, Chairman of the Evo-Stik Northern Premier League is delighted to have GreenFields on-board. “We’ve been looking for a pitch partner for some time to meet the information needs and growing demand from clubs looking to artificial turf pitches to generate additional revenues as well as providing a surface to play good football on. GreenFields’ philosophy matches our own so this agreement makes total sense for the league.”

Over the coming season the Evo-Stik NPL will be working with GreenFields to provide clubs with exclusive pitch installation and maintenance information and advice with a presence from the company at NPL events including the launch of a new ‘Pitch of the Year Award’ selected and presented by GreenFields at the annual awards event next June.

Paul Milton, Director of GreenFields commented: “We are excited by this new partnership and look forward to supporting and advising member clubs on their current and potential sports pitches. With over a decade’s experience, we have the expertise in house to be able to provide clubs with the best possible solution to meet their requirements.”