Farewell from Jim after decade of success: The man who has steered the UK’s first ever engineering academy to success over its first decade today retired – with tributes ringing in his ears.

Jim Wade became the first Principal of the JCB Academy in 2009, implementing the vision of JCB Chairman Lord Bamford to create a school dedicated to producing the engineers and business leaders of the future. When he joined, building work at the £22 million school in Rocester, Staffordshire, was only just getting under way. The following year, he was on hand to welcome the first 120 students through the doors of a unique establishment, which has gone on to be recognised nationally for its achievements. 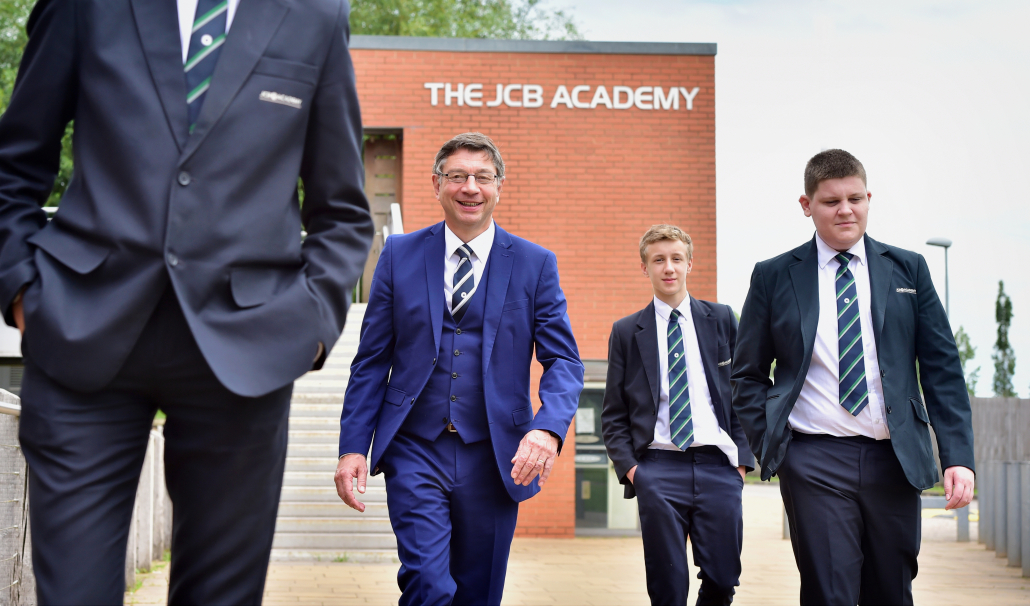 Farwell from Jim after decade of success

Today Jim retired having played a major role in the education of around 2,500 young people at an academy which has been oversubscribed every single year since it opened in a Grade II listed Arkwright Mill dating from 1781.

Jim said: “The most satisfying aspect of the past decade is that so many of our learners have gone on to fulfil roles in engineering leadership, which is exactly what we set out to achieve with the JCB Academy. They have already begun to make an impression on the world, whether that is by starting their own company, going to work for the UK Space Agency or re-designing body parts through bio-medical engineering degrees or working on the next generation of engines for JCB and Rolls-Royce. It has been so satisfying to see learners come to us and get the opportunity to ‘re-set’ themselves and find a new direction in life by having a practical bias to their educational experience. None of these achievements would have been possible without the tremendous JCB Academy team.”

The JCB Academy was the brainchild of Lord Bamford, who in his 45 years as Chairman of JCB, has championed the cause of British manufacturing. In the years before the Academy opened, he voiced fears over the decline in manufacturing and the shortage of young people with engineering skills emerging from the education system.

Today Anthony Bamford said: “The idea for the JCB Academy was conceived in 2006 out of deep concern that we needed the right calibre of young people to ensure we continued to be a nation of makers and innovators. Over the past 10 years Jim Wade has done an absolutely tremendous job translating my vision into reality and has made a vast contribution to developing the engineers and business leaders of the future. In doing so, he has helped transform the lives of thousands of young people, which is a legacy he should be immensely proud of.”

Chair of Governors Max Jeffery said: “Jim has been the cornerstone of the JCB Academy’s success and he has developed and led a great team utterly focused on the success of young people. He has worked tirelessly and pioneered a new way of educating young people. We wish him all the very best for the future.”

The JCB Academy was the first school of its kind in the UK for the education of 13 to 19-year-olds with a core focus on engineering. It was equipped with more than £1 million worth modern engineering equipment to help pupils turn their design ideas into reality. It included the only plasma cutter – a machine tool commonly used in industry – to be based in a UK school. The engineering tasks completed by pupils are set by The JCB Academy’s partners who include JCB, Rolls-Royce, Toyota, Network Rail, Bentley and National Grid.

As well as educating around 2,500 students, the JCB Academy has expanded to provide training for around 600 apprentices since 2013.

When Essex-born father-of-two Jim completed his degree in 1982, he initially embarked on a career in banking. After two years he decided on a change in direction and became a teacher. He later joined the JCB Academy from South Molton Community College in Devon where he had been Principal.

In retirement he is moving from Uttoxeter to Somerset, where he is building a house. Jim added: “If I have made a difference to young people’s lives then that is the most precious thing that I will take into retirement and hopefully that is what I have done at the JCB Academy and throughout my career.”