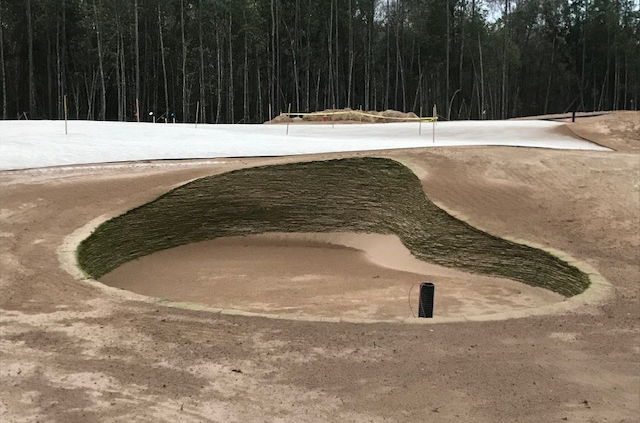 New Stillwater club to feature revetted EcoBunkers: Set to open in late 2021, the all-new Stillwater community and golf club will be located in Northeast Florida between Jacksonville and St. Augustine. This 18-hole layout will mark the area’s first new golf course since 2004.

Pete Dye protégé Bobby Weed, fresh off his new golf course build for Michael Jordan at The Grove XXIII, has been commissioned to design Stillwater. Set to debut as a semi-private course and hallmark for developer Lennar Corporation’s 550-home active adult community, the par-71 will stretch about 6,800 yards. 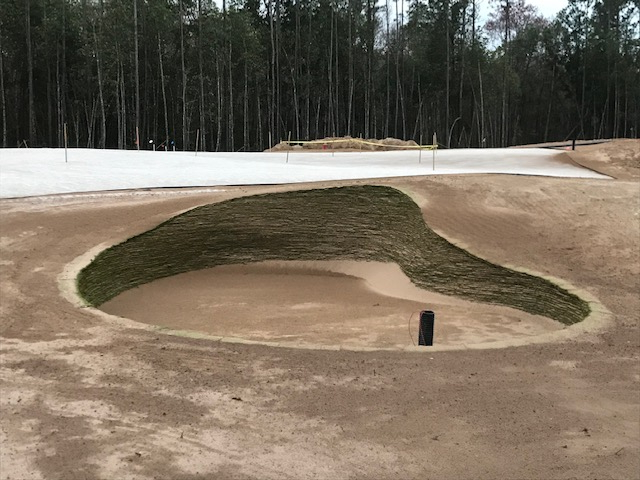 Unique to the area, Stillwater will feature revetted pot bunkers, made possible by EcoBunker’s synthetic bunker edging system. Synthetic grass tiles are built on top of each other to create a layered effect. The end product is a fortified bunker that reduces wind-based erosion and yields a beautiful on-course aesthetic. “Don’t expect a golf course from the past,” said architect Weed. “As the area’s first new course in almost two decades, we are providing Lennar with something distinct and different.”

Bunker maintenance is an intense labour commitment for clubs, and importing sand is expensive. By building revetted bunkers, clubs can keep more sand down while still offering strategic playing options. “We were satisfied using EcoBunker during our renovation at Medalist Golf Club in 2015,” Weed added. “We had a nine-inch rainstorm during construction, and they did not fail. Stillwater will also benefit from EcoBunker with noticeably less time and money spent on bunker maintenance.” Stillwater’s soil is relatively sandy, and thus does not require bunkers to be lined. However, there is sufficient drainage under them. The revetted walls sit at angles between 55 and 75 degrees.

“Revetted bunkers are exceptionally rare in warm season grass environments,” said Richard Allen, inventor and CEO of EcoBunker. “The extreme nature of these climates means that bunker faces can easily be destroyed by heavy rain. Our product helps solve that problem.”

Bobby Weed Golf Design is a leader in building environmentally conscious golf courses. Stillwater will be no exception. With EcoBunker’s support, Stillwater will feature just 70 acres of irrigated turf. Weed has also designed a more flexible layout for the course. It features loops of three, six and nine holes returning to the clubhouse, allowing members to play as their time permits.

To date, twelve holes have been shaped at Stillwater. Grassing should be completed by the end of August, and the course is expected to open by Thanksgiving in November. Stillwater marks an important milestone for EcoBunker in the US, as it has recently changed the channel through which it markets its solution in the country. Allen said: “The EcoBunker system made an exciting entry into the USA five years ago with fabulous projects at Medalist, Secession, LedgeRock and several others. After a period of marketing our product in the USA under a different brand name, we have decided to reinstate the EcoBunker brand, remove the middleman and provide our products and services directly, with all the client benefits that come with that. Stillwater will provide another stunning example of the possibilities of the EcoBunker system and we thank Bobby Weed for the opportunity to use this project as a key part of our re-launch.”

The first ever Official Celtic FC Festival runs Friday, July 26 – Sunday, July 28 with thousands of fans expected.  Two indoor pitches, one of 1200 m² and the other 400 m², using the latest non-infill AstroTurf Soccer Zero XI 30 carpet, have been created in a custom built arena. The new surface will be home to the Celtic soccer academy which will feature ‘train & play’ sessions, plus a host of family events throughout the weekend.

“This is an indoor pitch with a difference. Event team PSP Media commissioned a top-of-the range surface which will measure up to high use, and then after the weekend, it will be lifted and used elsewhere.”