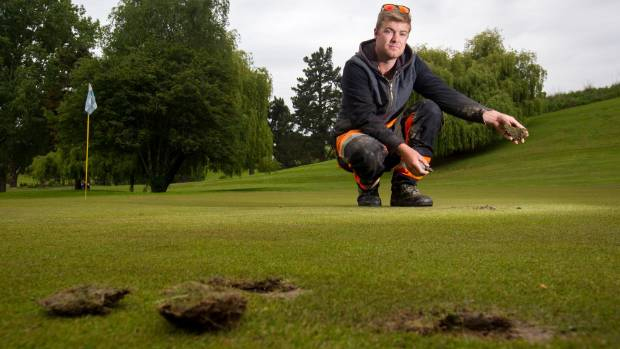 A number of flags used for on the greens have been going missing, while damage was also done to the green on the par 5 third hole on November 2.

The club’s greenkeeper Damian Rodgers said he couldn’t understand why people take the flags and hack at the greens.

“It’s just silly. I can’t understand why they’d do that. I mean why would you take a golf flag, what are you going to do with it.

“Some weeks we’ve had two or three flags go missing, other weeks none and at about $100 each to replace they’re aren’t cheap. It’s costing the club money.”

An insurance claim was looked into but with a steep excess the club opted against the idea.

Rodgers, who noticed the divots when he arrived to mow the third green about 8am on November 3, said the damage to the green was the first he’d since he started there 18 months ago.

“We’ve had plenty of flags go missing but that’s really the first bit of major damage to the greens.

“It’s honestly just a pain, it puts your day out and it meant I took a couple of hours trying to repair the green.”

The hole was out of action for most of the day on Friday and while it is now playable again, the divots from where the vandals hacked the green can still be seen.

“They’ll take a bit to fix completely but they hacked all round the holes and a couple of other parts on the green but we have fixed them so people can play the hole.”

Rodgers said they have an idea on who may have done it but isn’t certain.

“It’s in a secluded area the green, most of the stuff happens down this way because they often can’t be seen.”

He couldn’t understand why people would do those things at a golf club.

“It’s here for people to play. I don’t know why you’d do that it hasn’t done anything to them, it’s just really disappointing.”

Rodgers said they hoped this sort of stuff wouldn’t continue to happen.

This vandalism follows damage to the sports fields in Pleasant Point and at the Celtic club in Timaru that were badly damaged back in May and the smashing of war memorial panels at Caroline Bay on November 3.