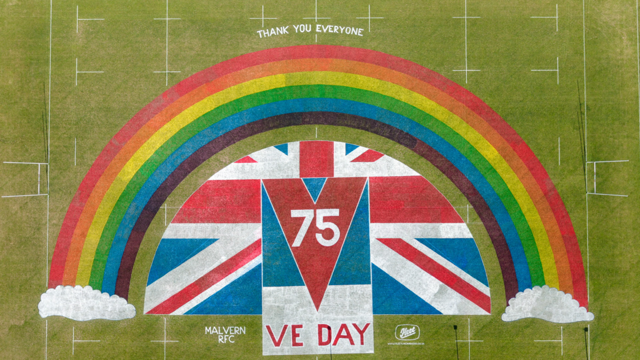 Fleet paint VE Day rainbow: About 4 weeks ago, we were asked by Julie Wills, the Head Teacher of Upton Upon Severn Primary School, if we could paint a large rainbow on their playing field in support of all the Key Workers. We of course said “Yes, it’ll be a pleasure!”.  So my colleague, Chris Bridges, and I set about creating a beautiful rainbow on their playing field.

The end result was amazing and was reported by BBC Hereford & Worcester and appeared on BBC Midlands Today TV at tea time.

A couple of weeks later, Malvern Community Hospital asked if we could paint another outside the reception of the Hospital, on grass. So again Chris and I set about creating a smaller rainbow outside the Hospital. This is still bringing smiles to the faces of staff as they enter and leave the hospital.

Whilst being interviewed by Justyn Surrall of BBC Hereford & Worcester after the second rainbow, Justyn jokingly said to me “maybe we’ll have a competition to see who can do the biggest rainbow”. This stuck in my mind for a couple of weeks. I then called Malvern Rugby Club to check they would be ok with us (Fleet) painting a rainbow, the full length of the 1st XV PITCH from try line to try line …. 100 metres in length! The Club were extremely excited about the whole idea.

This rainbow needed to be different to the other two, which it certainly would be due to its size! My colleague Chris reminded me about VE DAY on the 08th May, so with this is mind, we thought we’d make it a tribute to all the Key Workers as well as remembering VE DAY.  The end result has been particularly well received. It has made the National News channels, as well as Regional News. It has appeared as far afield as New Zealand on their National News as well as many countries across Europe. As well as being 100 metres from one end to the other, below the net arc of the rainbow, we painted the VE DAY logo set on top of a Union Jack Flag. Our MAQA GNSS system was used to plot the Flag, our BeamRider Laser System was used for the VE DAY logo and it was back to basics using a tape measure and straight edges to do the lettering etc. The 7 & 5 on the VE DAY logo were 6 metres in height, the VE DAY letters were 4 metres high and the rest of the text at about 1.3 metres. Each colour of the rainbow was 2.5 metres in width. If you walked around  the red arc of the rainbow, the distance would be around 157 metres!  It took about 2.5/3 days for Chris, Ali S, Adam and myself to get this “small project“ painted in ( plus I roped in my son for half a day and Ali M who flew the drone for videos and pics was roped in for a few hours as well! All socially distancing of course) A massive thanks and pat on the back to everyone involved.