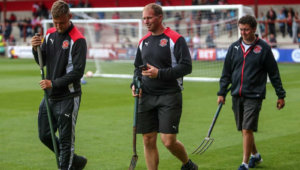 The club announced Frith’s departure to PSD Agronomy as a senior consultant earlier this month with his deputy Hyndman gaining a promotion and officially taking over the reins on June 1.

Hyndman has been with the club for over six years and has progressed from part-time groundsman through to his new role under the tutorship of Frith.

Hyndman said: “I feel like learning under Dale has put me in a great position to keep up the standards and continue the great work he and the team have done.

“I’ve watched the club grow around me in the last six and a half years. Previously the pitches were looked after by contractors but now we have a superb ground at Highbury and unbelievable facility at Poolfoot Farm.”

In further changes to the department Liam Scott-Rattray will fill Hyndman’s position as deputy head groundsman, Oliver Vincent moves to an assistant groundsman role alongside Ashley Roche, with Cameron Chisholm one of two apprentice groundsmen. Another apprentice will be appointed in the coming days.

To read the original article from Blackpool Gazette, click here