Toro Best For North Foreland: Ten new machines are scoring top marks for results on the ‘Long’ and ‘Short’ courses at North Foreland Golf Club, based in Broadstairs, Kent.

The purchase marks a change in strategy by course manager Simon Grand, who joined the club two years ago, and greens chairman Mark Strand as Simon explains: “The frontline machinery was suffering from under investment and the number of breakdowns we were having were coming at a significant cost.” 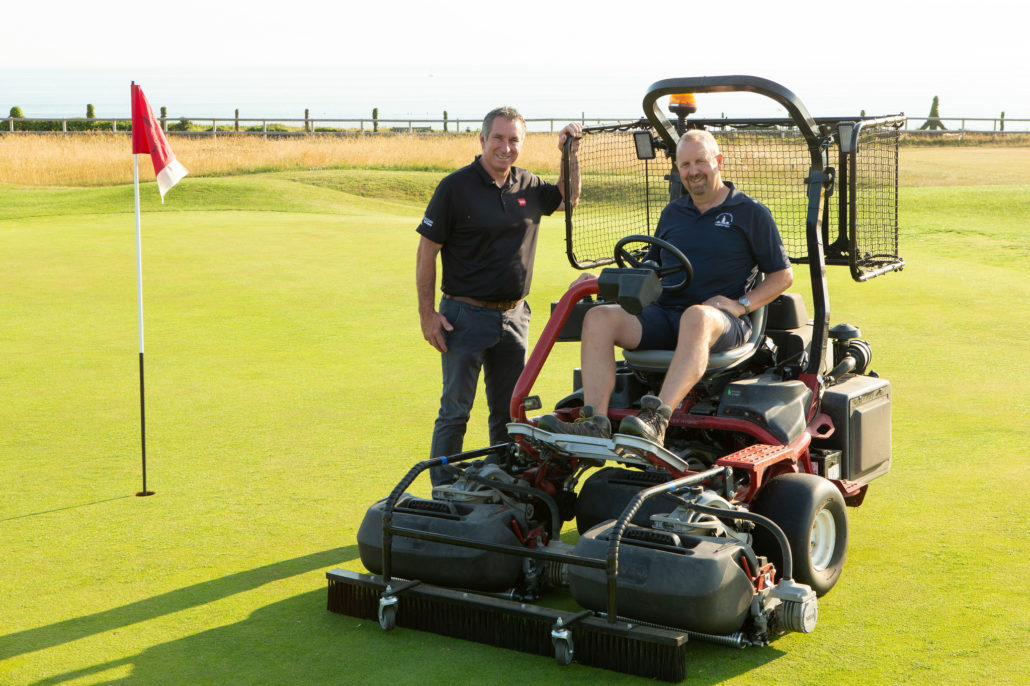 The order of two Reelmaster 3575-D, four Greensmaster TriFlex 3400, two GreensPro 1260, a Groundsmaster 4700-D and a Workman HDX-D is the first lease deal for North Foreland, and has brought big differences to the courses’ appearance and the club’s maintenance regime.

“This investment, which is spread over five years, has solved all our equipment issues,” says Simon. “It’s made us competitive and efficient, and the change in the presentation of the courses is undeniable – members noticed a difference within weeks.”

And that’s down to the quality of the machines, as Simon explains: “It’s been said many times before, but you really do notice the difference when it comes to Toro. The quality of cut and reliability it offers makes a big difference to the way we do our job; it’s so much easier now. We’ve also been impressed by the increased operator protection provided by the addition of the new Toro golf ball protection cages we have fitted to all the mowing machines, as well as the way using Toro is changing the way we manage the cutting of certain areas. For example, with the Reelmaster 3575-D we can close-cut the run-off areas around the links-style greens because the machines are so lightweight and benefit from ‘no tread’ balloon tyres.”

The deal comes as the club, which is one of only six designed by two of golf’s pre-eminent golf architects, Herbert Fowler and Tom Simpson, enters a period of restoration as Simon tells us: “We’re restoring the course to its original downland design, including the refurbishment of the bunkers. This will be aided greatly by all the Toro machines at some point, but especially the Workman HDX-D for transportation.”

Richard Wood, from Reesink, an official UK distributor of Toro, says this is a classic example of how easy it is to catch up on machinery replacement: “This deal marks North Foreland’s return to machinery leasing and is already making a significant difference. It’s provided a huge boost to the club, the course and the team.”

Simon agrees: “Investment reflects and demonstrates the value placed on the work we do. It’s been great to see the way the team has responded, and how much more enjoyable and less frustrating the work is.”