James is an ambitious young groundsman and his prominent position at the London Stadium certainly is testament to this. The Welshman is about to embark on his fourth year in the role and understandably, he believes that 2020 has been the most challenging yet – but not for the reasons you might think. 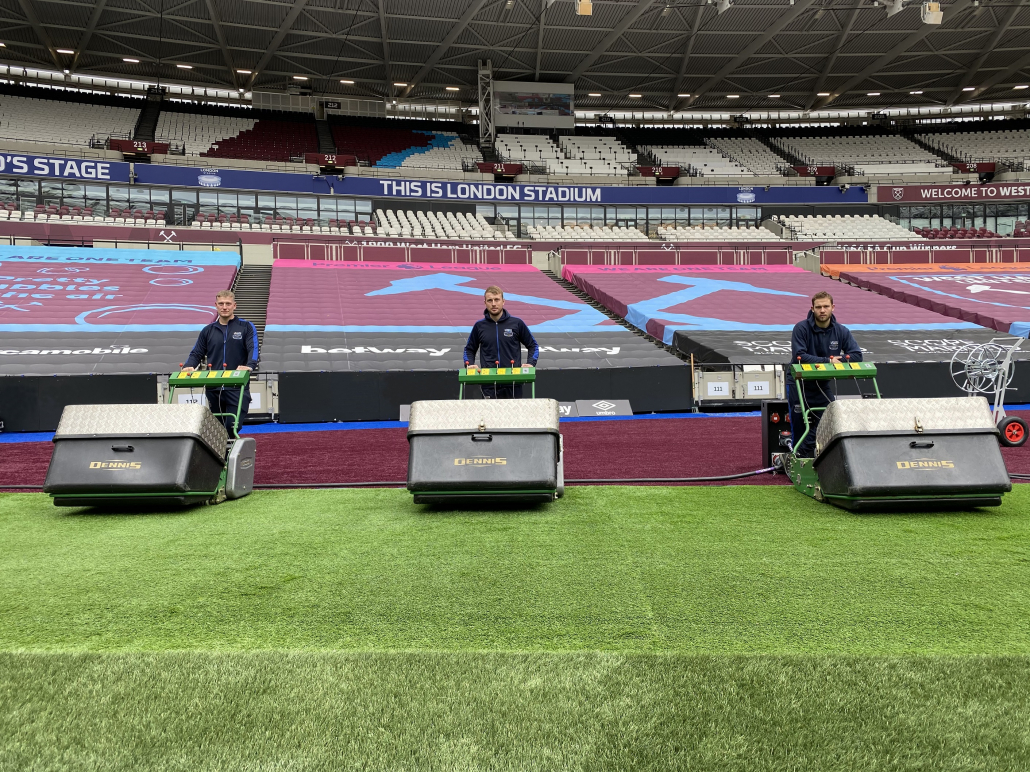 “It’s been a difficult year due to the pandemic,” he said. “The worst thing is waking up in the morning on a matchday and there’s just no spark because you know there will be no fans to showcase your pitch to.”

James obviously takes great pride in his work; he is hard-working, committed and works round the clock to ensure that the pitch is in the best possible condition. Anywhere he can make improvements he will strive to do so – and therefore when an opportunity presented itself, James was quick to seize it.

“When football started again, the Premier League announced that we have to prepare the pitch and leave it well alone five hours before kick-off – it used to be three,” said James.

“This would mean starting a lot earlier and so my CEO asked me if there was anything I needed which could help. Straight away, I told him that two more Dennis G860’s would be nice!”

The London Stadium already had three Dennis G860’s in its armoury when James arrived, and he was pleased to see a familiar mower – one which he had become accustomed to for many years previously.

“I used the G860’s the whole time I was at Swansea City FC,” he said. “I’m just extremely comfortable with them – they are reliable, adaptable and they get the job done to the high standard I expect.”

James isn’t the only groundsman to be of this opinion as many of his peers have long relied on the G860 to provide the perfect cut for sports turf. Lightweight at just 166kg; it is easy to manoeuvre and comfortable to operate.

The mower features a large diameter front roller with an adjustable scraper which has been designed for a precise height of cut control, giving an excellent finish on every occasion. The Dennis G860 also features an interchangeable cassette system to assist with a wide range of tasks such as including scarifying, verticutting, brushing, spiking, and slitting.

“The G860’s are normally brought out towards the end of the week once the pitch has been repaired to make sure that it is in the best shape going into a matchday.

“When the grass gets too thick, or if it’s dying off, we will use the verticutting cassette to clear that out – just to stop it from causing any thatch or disease. We probably verticut once a month as well as use the brush – both help to keep the pitch nice and healthy.

“The 8 bladed cutting cylinder always offers a fantastic finish,” continued James. “I like to cut down to 23mm for matchdays but if there is period when we’ve got a lot of games and training sessions on the pitch then I’ll take it up to 26mm for extra protection and coverage.”

The Dennis G860 was an instant hit when it was first developed and over the years it has proven to be one of the most popular sports turf mowers on the market. There is a reason behind its success according to James.

“Do you know what I like about the G860? It’s the fact that it hasn’t changed a lot. Dennis as a company has evolved with some other great machinery but the G860 doesn’t need to. Why would you evolve something that doesn’t need fixing? You can’t improve perfection.”

It’s an exciting time for the West Midlands based club; when the new owners took control last year part of their strategy was to place a big emphasis on the style of football they wanted Wolves to play. As a result they were committed to investing in the surface at Molineux Stadium. 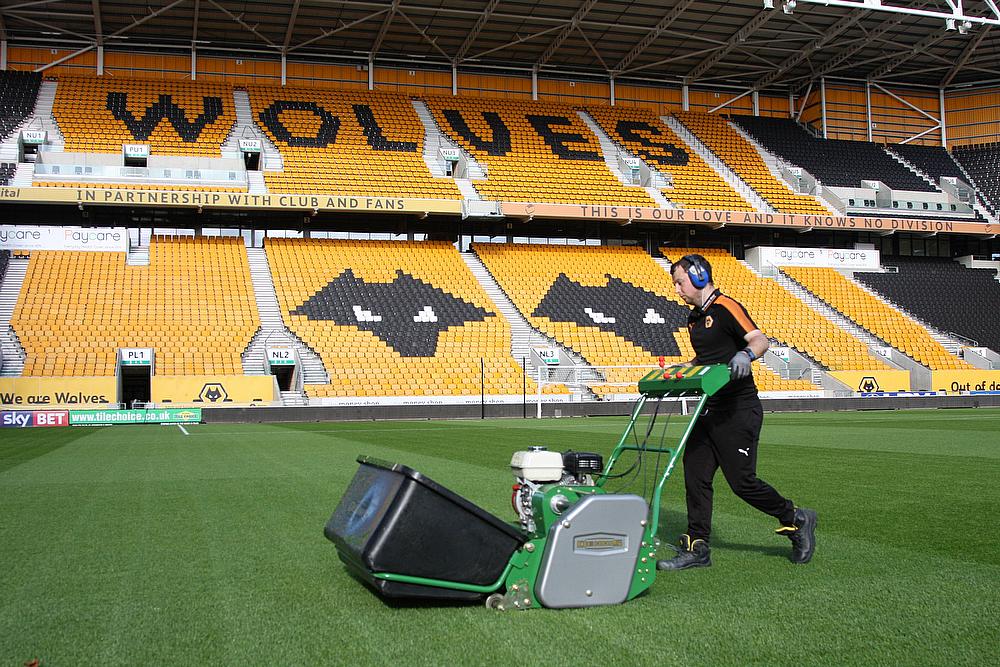 A state-of-the-art Desso Grassmaster hybrid pitch, which is used by top clubs across Europe, was installed shortly after the new owners’ arrival. Secondly, it was time to look at upgrading the turf maintenance machinery.

“When the option came to invest in new machinery, we jumped at the chance of going back to Dennis,” says Anthony Parker, deputy head groundsman. “Certainly for me, I’ve come from a private school background where I have been brought up on Dennis machines. We also used to use the Dennis Premier here on our old fibre elastic pitch. However, the Desso Grassmaster is renowned for being a bit firmer so we decided to go for the Dennis G860 when the new pitch was installed.”

Lightweight at just 166kg; it is easy to manoeuvre and comfortable to operate. The handlebar console houses the controls for – throttle, parking brake, roller drive and cutting cylinder drive. The mower also features a large diameter front roller with an adjustable scraper which has been designed for a precise height of cut control, giving an excellent finish on every occasion.

The Dennis G860 also features an interchangeable cassette system to assist with a wide range of tasks. With a simple one-minute changeover, users have the option of fitting thirteen different types of cassettes including scarifiers, verticutters, brushes, spikers, and slitters as well as six, eight or eleven bladed cutting cylinders.

“We purchased three G860’s with the full range of cassettes which gives us so much versatility,” says Anthony. “We use them on a daily basis. The verticutting unit is used quite regularly to clean out the surface and we really see the benefits from this. The brushes are a great option too and we use the machines at both the stadium and the training ground.

“With three mowers we now double cut on match days and the G860’s are perfect for presentation and getting a quality finish every time. They create the ideal pitch suitable for how the owners want the team to play.

“Dennis mowers are simply renowned for being a quality piece of kit and the equipment speaks for itself. They are really user friendly and since we’ve had them all of the team have been really impressed.”